HARARE, Zimbabwe (AP) — After learning that a friend tested positive for COVID-19, Thembi Ndlovu went to a health clinic in Zimbabwe’s capital in search of a free coronavirus test. But there were none left that day, leaving the 34-year-old hairdresser unsure if she needed to take precautions to protect clients. 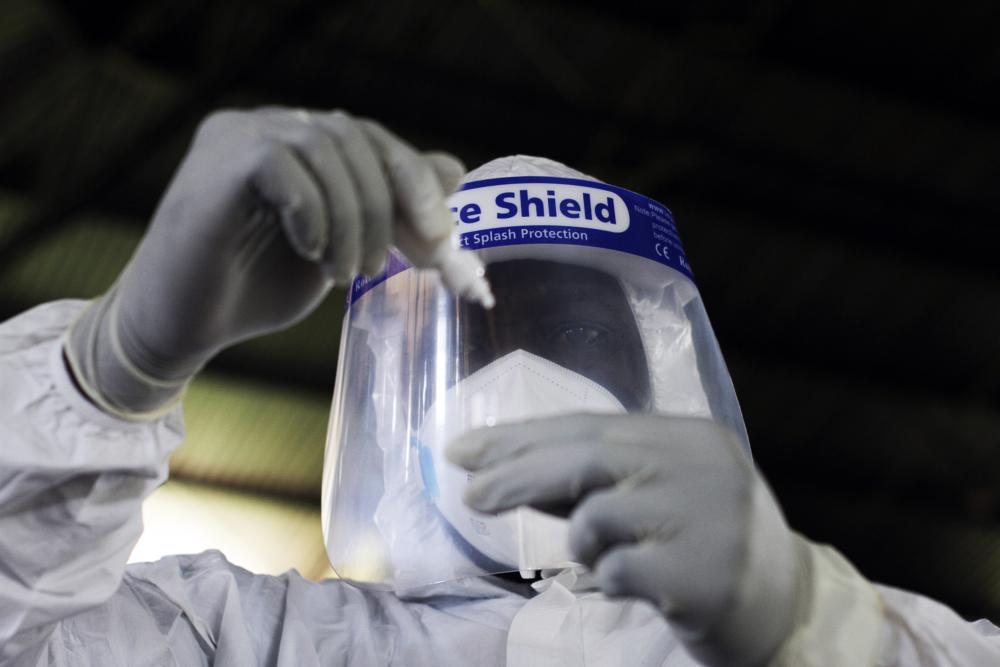 A health official takes a sample for tests at a private Covid-19 testing centre in Harare, Zimbabwe, Thursday, Feb, 3, 2022. African nations have very limited access to COVID-19 tests, especially at-home tests. In the absence of vaccines, that discrepancy has denied millions of poor people an easy way to stem the spread of the coronavirus, health officials say. (AP Photo/Tsvangirayi Mukwazhi)

“I wish we could just walk into a pharmacy and buy a cheap self-testing kit like we do with pregnancy or HIV,” she said as she left the clinic in a working-class township of Harare. “It would be much easier.”

For millions of people in rich countries, COVID-19 self-tests have at times been abundant and free, including in Britain, Canada, France and Germany. But most people across Africa have limited access to them.

Zimbabwe introduced free walk-in testing centers in November 2020, but supplies are tight and the country still has no national program to distribute at-home tests.

Although self-tests are available in some Zimbabwean pharmacies, they cost up to $15 each, a fortune in a country where more than 70% of the population lives in extreme poverty made worse by the pandemic. The situation is similar elsewhere across the continent — and in parts of Asia and Latin America — with few, if any, opportunities for people to easily test themselves.

Perhaps the biggest obstacle to making inexpensive, self-tests widely available in the developing world is that the World Health Organization has yet to issue guidance on their use. Without the resources of wealthy countries to buy tests or evaluate their safety, poor countries must wait for WHO approval before aid groups and international agencies are willing to donate them in large numbers.

“Donors cannot deploy the tests until WHO say it’s OK to deploy, and countries themselves don’t want to use the tests until they get that guidance,” said Brook Baker, a professor at Northeastern University who advises the WHO and others on equitable access to COVID-19 medicines and tests.

Some health officials say the discrepancy between rich and poor countries is discriminatory and has denied poor countries a chance to stem the spread of the coronavirus in the absence of vaccines. And unlike the massive global effort to share vaccines, little has been done to roll out more tests of any kind across much of Africa.

The omicron surge appears to have peaked across Africa, as it has in other parts of the world. In the last week, the WHO says Africa recorded at least 125,000 COVID cases and 1,600 deaths, although that is likely an undercount due to the lack of testing.

Baker and other experts have estimated the self-testing kits might not be widely available in the developing world until sometime next year.

In a statement, WHO said that setting guidelines is a “rigorous process that takes time” and that it expects to finalize advice for the use of COVID-19 self-tests in March. The agency said it has supplied more than 31 million rapid tests to health professionals in developing countries.

In an open letter to WHO chief Tedros Adhanom Ghebreyesus, more than 100 organizations last week called on the U.N. agency to speed its release of the self-testing guidelines, saying that 85% of infections are likely going unnoticed in Africa.

“We cannot tolerate a situation in which access to widespread testing, along with linkage to care and treatment, becomes the norm in the populations of wealthier countries while diagnostic access … is missing in (poor) countries,” wrote the authors, whose signatories included Amnesty International and Oxfam. They called it “part of the same ‘medical apartheid’ that has plagued the rollout of COVID-19 vaccines.”

Groups that work closely with WHO say there is enough evidence that the self-tests help slow transmission based on rich countries’ experience and that the guidelines should have been issued long ago.

“There’s no reason to think that people swabbing their noses in the U.K. are going to do it any differently than people in Malawi,” said Bill Rodriguez, CEO of FIND, a Geneva-based global alliance for diagnostics.

With the extra-contagious omicron variant driving global transmission, Rodriguez and others say the rapid self-tests are sorely needed everywhere.

“Without high levels of vaccination in developing countries, we need to give people every tool possible to reduce their risk,” Rodriguez said.

John Nkengasong, director of the Africa Centres for Disease Control and Prevention, said people would be more empowered to take action if at-home tests were available.

“We have learned from HIV that self-testing is so critical because when people know their status, they do the right thing,” he said.

Others pointed out that with generic versions of COVID-19 pills made by Merck and Pfizer on the way — after the companies agreed to let dozens of manufacturers make versions for poor countries — the tests will be even more crucial in the coming months.

“It seems kind of puzzling that we could have the treatments before we have the testing that tells us which people should get the treatments,” said Northeastern’s Baker.

Dr. Mamunur Rahman Malik, WHO’s representative in Somalia, said a pilot study in that country found that health workers using the tests led to a 40% increase of cases being detected.

“Without these tests, we do not have a full picture of how the epidemic is evolving,” Malik said, adding that the project showed the tests’ use are also possible in difficult, conflict-ridden environments like Somalia.

Rodriguez said WHO self-testing guidelines are also needed so authorities can address other potential issues, including ramping up the production of inexpensive testing kits. Some of the same problems that complicated COVID-19 vaccine production exist for test manufacturing, namely a shortage of raw materials and competent producers, but they are not as acute, he said.

He said that inexpensive self-tests were being made in countries such as Brazil, India, Morocco, Senegal and South Africa.

Still, even wealthy countries have struggled to maintain adequate supplies of the at-home tests, with demand far outpacing supply at times in the U.S., Canada and elsewhere.

Back in Harare, public health specialist Dr. Johannes Marisa despaired that people were not keen to get tested unless they were sick or needed a negative result to work, compromising efforts to stop the pandemic.

“It becomes deadly because many people only present themselves at health facilities when they become seriously sick and sometimes it’s too late to save them,” he said. Marisa said more education was needed to convince people to get tested earlier.

Ndlovu, the hairdresser, was told to return to the clinic in two days to get tested. She had several clients wanting to get their hair braided and wanted to avoid putting them at risk, but could not afford the private tests elsewhere that might cost up to $60.