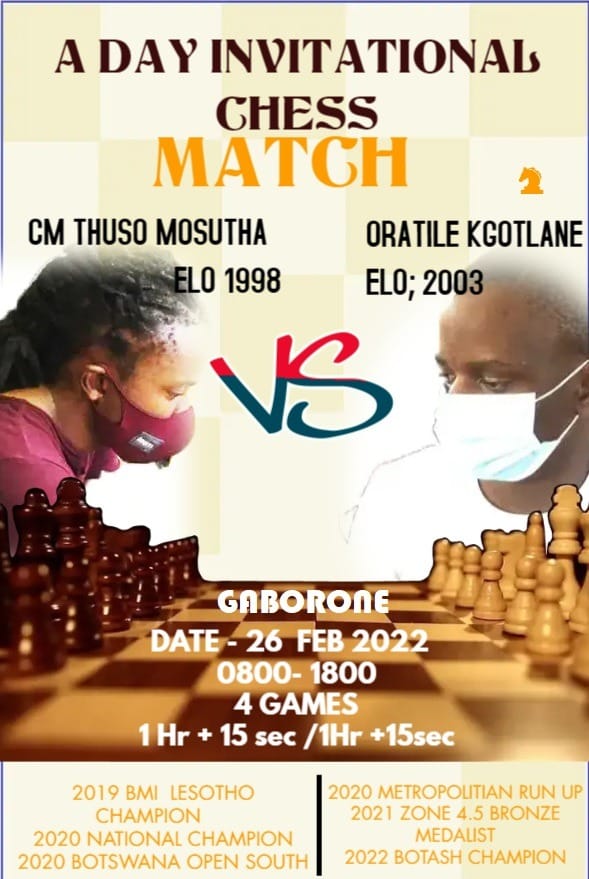 who are doing well in the chess circles.Candidate Master Thuso Mosutha whose Fide rating is currently is 1998 will play four games which are classical games against Oratile Kgotlane. Oratile ‘s rating is slightly higher than Mosutho’s rating. His rating is 2003.Mosotho is the holder of the following tournaments:2019 BMI Lesotho Open,2020 National Champion and 2020 Botswana Open South Winner. On the other hand Oratile is the winner of the following tournaments: He is the runner up of the 2020 Metropolitan chess tournament,Zone 4.5 Bronze medalist and the 2022 Botash Chess Champion.

The Botash chess championships he defeated the seasoned Spencer Masango in the final round who nearly routed his opponents to finish with a perfect score. However this dream was only cut short by Oratile who went on to win the tournament though they were tied in the same position for the honours and he had a superior buchholz for the tie-break rules. Oratile cannot be ruled out in this tournament as he is an underdog. He is among the most improved chess players of his generation.

If the players are tied at the end of the one hour 15 minutes plus five seconds games they will play blitz to get the winners. The Organizers of the match are still looking for more sponsorship to make the match attractive. This is the beginning of better things to come and more games to be played in this format.