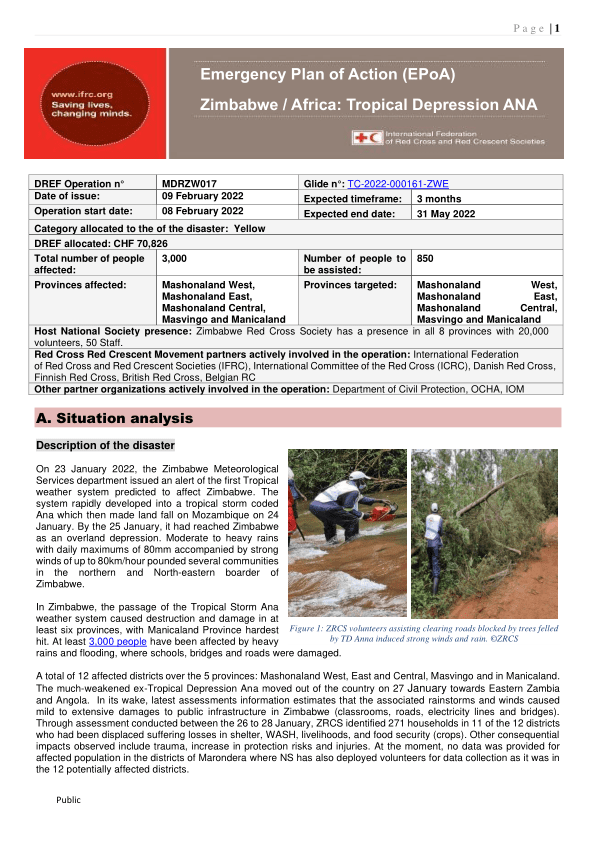 Description of the disaster

On 23 January 2022, the Zimbabwe Meteorological Services department issued an alert of the first Tropical weather system predicted to affect Zimbabwe. The system rapidly developed into a tropical storm coded Ana which then made land fall on Mozambique on 24 January. By the 25 January, it had reached Zimbabwe as an overland depression. Moderate to heavy rains with daily maximums of 80mm accompanied by strong winds of up to 80km/hour pounded several communities in the northern and North-eastern boarder of Zimbabwe.

In Zimbabwe, the passage of the Tropical Storm Ana weather system caused destruction and damage in at least six provinces, with Manicaland Province hardest hit. At least 3,000 people have been affected by heavy rains and flooding, where schools, bridges and roads were damaged.

A total of 12 affected districts over the 5 provinces: Mashonaland West, East and Central, Masvingo and in Manicaland. The much-weakened ex-Tropical Depression Ana moved out of the country on 27 January towards Eastern Zambia and Angola. In its wake, latest assessments information estimates that the associated rainstorms and winds caused mild to extensive damages to public infrastructure in Zimbabwe (classrooms, roads, electricity lines and bridges). Through assessment conducted between the 26 to 28 January, ZRCS identified 271 households in 11 of the 12 districts who had been displaced suffering losses in shelter, WASH, livelihoods, and food security (crops). Other consequential impacts observed include trauma, increase in protection risks and injuries. At the moment, no data was provided for affected population in the districts of Marondera where NS has also deployed volunteers for data collection as it was in the 12 potentially affected districts.

The Department of Civil Protection who coordinate the overall response, appealed for support for the preparedness and response to Tropical Depression Ana during the National Emergency services sub-committee meeting on 24 January.

On 30 January 2022, UN OCHA called an emergency meeting of the Inter Cluster Coordination Group of which IFRC are a member. OCHA informed the ICCG members of reports of flooding in Mbire that indicated Chitsungo/ Karai, Chikafa/Nyambudzi, Chidodo / Chisengezi areas are not accessible.

Since the start of the emergency, ZRCS activated its contingency plan and provided early warning alerts, prepositioning materials, assessment teams and simultaneously distributed relief items to the affected households.

This DREF operation contributes to the ZRCS plans to support 170 most vulnerable households with shelter, WASH and health interventions and are requesting a DREF allocation of CHF 70,826 to: