Lusaka – Zimbabwean political parties participating in the March 26 by-election must ensure journalists can cover the events freely and prevent their supporters and officials from harassing or assaulting the press, the Committee to Protect Journalists said Friday. 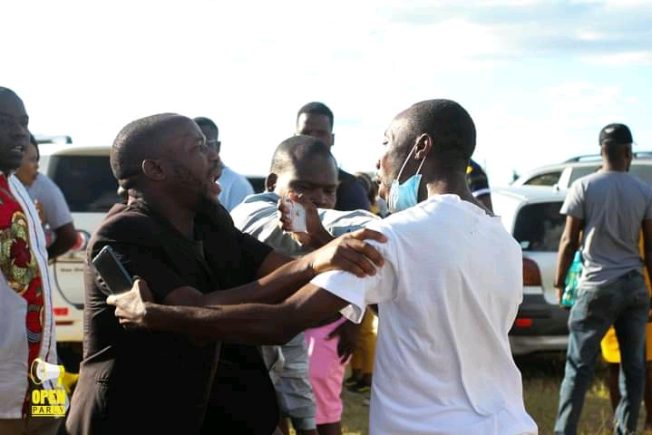 Courage Dutiro (right), a journalist for the Zimbabwean newspaper TellZim, was slapped and manhandled by a bodyguard after taking pictures when a candidate collapsed at a political rally. (Open Parly)

Around 4 p.m. on Sunday, March 20, in Masvingo, about 182 miles (290 kilometers) south of the capital Harare, Courage Dutiro, a journalist for the privately owned newspaper TellZim, was covering an opposition Citizens Coalition for Change (CCC) election rally when Thokozile Muchuchuti, one of the party’s candidates, reportedly collapsed, according to Dutiro, who spoke to CPJ via messaging app, a tweet by TellZim, and a statement from the Zimbabwe chapter of the regional press freedom body Media Institute of Southern Africa.

When Dutiro began taking photos, a member of the security detail of CCC leader Nelson Chamisa slapped the journalist and physically manhandled him to try and prevent him from shooting pictures, according to those same sources. Chamisa was rescued by CCC deputy spokesperson Ositalosi Siziba, who witnessed the assault and intervened, Dutiro said.

“We urge the opposition Citizens Coalition for Change and other political parties participating in this weekend’s election and beyond to champion press freedom and ensure that members of the press are not harmed,” said Angela Quintal, CPJ’s Africa program coordinator, from New York. “A free flow of information and unfettered access is key to holding credible elections and any attempt to interfere with or stop journalists from doing their jobs must be condemned and action taken to ensure it does not happen again.”

The assault on Dutiro comes just six days before the long-awaited March 26 by-election, which was delayed by the COVID-19 pandemic and will fill 133 National Assembly and several local authority seats across Zimbabwe that were declared vacant after a recall of members of Parliament and councilors by the opposition MDC-T party, according to media reports.

“It’s not the CCC way,” CCC spokesperson Fadzayi Mahere told CPJ via messaging app, adding that she and her team were not aware of the assault on Dutiro and that the rally “went on peacefully.” Mahere also said, “We will get to the bottom of this” to ensure the safety and freedom of journalists is never compromised at their rallies, adding that, “We value the work of journalists, as they’re key partners in sharing our message.”

Before the journalist left the rally, the bodyguard offered what Dutiro described as a half-hearted apology, saying it was up to the journalist to accept or not.

The next day, Dutiro was treated at Masvingo General Hospital for a swollen right lower eyelid and other “slight” injuries consistent with being hit with a “blunt object,” according to medical records CPJ reviewed.

CPJ called Siziba and sent a request for comment via messaging app but did not immediately receive a response.