President Emmerson Mnangagwa's party, ZANU PF, has held a tight grip over Zimbabwe's media landscape for years and used it as a tool to spread disinformation and quash dissent. But the advent of social media is changing the game. Could it spell the end of Mnangagwa's regime in the upcoming 2023 general elections? 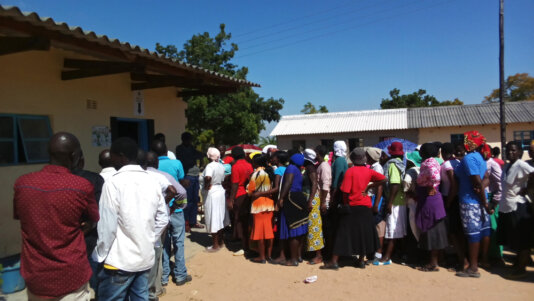 A prominent supporter of Zimbabwe’s major opposition party, the Citizens Coalition for Change, was arrested and brutally tortured by the police in the country’s capital, Harare, in March this year. But hardly an hour after the horrific attack, images of his severe injuries were all over social media.

In the past, such police brutality on opposition political activists went largely hidden from the public; but with the growing use of social media in Zimbabwe, political and human rights activists and whistleblowers can now quickly bring these attacks to the public’s attention – within and outside of Zimbabwe.

But fears abound that state-sponsored violence against opposition political party supporters in the country are expected to escalate ahead of the 2023 general elections.

However, Jessica Geraldine, a young political and human rights activist opined that although the police and ZANU PF were unleashing violent campaigns against supporters of the Citizens Coalition for Change – in a manner reminiscent of the 2008 bloody general elections – this time, thanks to social media, they will not be able to get away with it.

“2008 [state sponsored violence] loading, but this time we are woke. 2008 no one could circulate pictures of victims; you [the government] said there was no evidence. You controlled state media through propaganda. Right now is less than 1 hour [after the attack] the whole world can see through you,” Geraldine tweeted.

As the country hurtles towards the 2023 general elections, the Citizens Coalition for Change led by Nelson Chamisa has unleashed an army of voluntary, tech-savvy young Zimbabweans to reach out to supporters and the electorate through social media platforms such as Twitter, Facebook, WhatsApp, TikTok and Instagram, among others.

Geraldine is one of the young Zimbabweans using social media to expose state-sponsored violence and any attempts to rig the elections in favour of ZANU PF.

“I do hope we will get a free [country]. I have often seen and heard people say I am a [political or human rights] activist. I can’t qualify as either, I just want change,” Geraldine told FairPlanet.

Having already bagged most of the vacant parliamentary and council seats contested in the  by-elections on 26 March, 2022, the Citizens Coalition for Change is upbeat that it will successfully harness the power of social media to tilt the 2023 general elections in its favour.

In Zimbabwe, the traditional media landscape remains heavily controlled by government and skewed in favour of the ruling party, ZANU PF, which is led by president Emmerson Mnangagwa who seized power from Robert Mugabe in a 2017 military coup.

Opposition parties, particularly the Citizens Coalition for Change, have been denied access to the public newspapers, television and radio stations. With a single terrestrial television station – the Zimbabwe Broadcasting Corporation Television – owned by the state and a number of radio stations owned by the government or cronies of the ruling party, it is difficult for opposition parties to have their voices heard in traditional media.

But with the boom of social media, the power to publish information now lies with anyone owning a smart phone and with access to the internet. The monopoly of traditional media editors as the final gatekeepers of information in Zimbabwe is therefore slowly fading. And, according to datareportal.com, by January this year there were 1.55 million social media users in Zimbabwe. The number of social media users in the country increased by 250,000 between 2021 and 2022, the data agency reported.

Bernard Chiketo, a media expert and editorial cartoonist, said that social media had so far effectively worked as a buffer to the ruling ZANU PF government’s campaign of disinformation through its tightly controlled state media apparatus.

“Public confidence in the credibility of information that is communicated via various platforms has also grown amidst government censor and capture of traditional media platforms. [Social media] is shaping public opinion and perception of political players is undeniable,” said Chiketo, who is popularly known as Ben Moto.

Chiketo added that social media’s growing influence had turned it into the new main battleground, with all political actors convinced that whoever manages to control it would be able to sway the vote, which they believe will effectively be decided by the youth – a constituency that considers itself native to such platforms.

“That social media will shape the outcome of the 2023 general election is a no-brainer. The use of Facebook to conduct e-rallies and Twitter spaces to conduct interviews with voices that could never find space in state media has even emboldened the opposition Citizens Coalition for Change president Nelson Chamisa to even considering barring Zanu PF controlled media institutions from its rallies and events,”  he said.

Gift Ostallos Siziba, the national deputy spokesperson for Citizens Coalition for Change, said that Zimbabwe faced an incredibly difficult problem in elections, particularly as far as reforms are concerned.

“Of the key reform areas is the access to state media which has been monopolised and used as a propaganda tool by the ruling class for the purpose of power accumulation and power retention,” Siziba said. “But as a modern democratic movement we have realised that we have to find opportunities and platforms to be able to articulate and distribute our messages in an organised society.”

He added that social media has been undermined by the ruling regime in Harare but had proven scientifically to be an effective tool for Citizens Coalition for Change to communicate with ordinary people in this country; people whom the party could not reach out to via the state radio and state television.

“So we have been able to communicate clearly with our people through the social media platforms, in particular WhatsApp, which is predominantly used by a lot of people,” he said.

Siziba said that his party has been using social media to organise supporters.

“It’s been a critical platform to organise and structure our people in different communities. At community level citizens have been able to communicate and organise meetings, programmes and ensure that our message reaches out to the deep ends of society,” he said.

“Politics is also about creating momentum in what philosophers call the conscious of the moment. So we have been able to galvanise the communities in creating momentum for citizens’ movement through the use of social media,” he said.

He added that social media platforms have been a critical in convening the leadership particularly in the era of COVID-19, as the party used online platforms to hold meetings on Zoom, Facebook and Twitter.

“On Twitter, we have been able to communicate with critical stakeholders like Zimbabweans in the diaspora, tapping into the intellectual capacity of citizens to be able to raise funds using witter spaces and platforms like Facebook live.”

Siziba further stated that the Citizens Coalition for Change was able to tap into a new social bases – the middle class and millennials – which follow the party’s activities on Instagram and TikTok. The party has been sending out messages and creating content on these platforms for and by ordinary people in their own communities.

“Social media in that respect has been a critical arm for us to articulate the message and most important to expose the authoritarian regime,” he said.