Tawanda Mhako is the winner of the 2022 Minerva Open Development section. He won the section with a perfect score of 6 points. 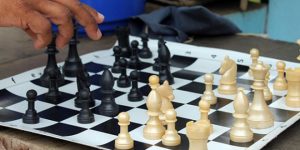 He won a $30 USD chess set, tie stationery and pens. Sichoni Learnmore finished second with 5 points out of the six games played.

Ronald Chitakunye, Razilahamed Craig, and Mashava Danmore all finished with 5 points. They won their prizes in cash and also some stationery

pens and ties. Mahata Duncan, Gore Blessed and Mhuriro Tafadzwa all had 4.5 points out of 6. They were tied in 6th position. Antonio Vonn and Kudzaishe

Chindiya completed the top ten. These last two players had four points. Sixty -four players took part in this tournament and there was a lot of fighting chess in this section.

Tawanda said,” the tournament was very tough. A lot of players were just a point behind me and it gave me a lot of pressure knowing that if I was to lose the final game, the results were not going to be good for me.”

Learnmore Sichoni was my toughest opponent in the game.

On the special prizes the youngest player of the tournament was Tawonaishe Chimboza.

The best under 8 boy was Munashe Mucherere, while the girl for the same age group was Anashe Gandawa.
Otis Hlatswayo and Tanatswa Mabhiza were the best under ten boy and girl respectively. Danmore Mashava and

Nadia Mupetura were the best under 12 boy and girl.

Antonio Vonn and Matifadzaishe Mhungu were the best under 14 boy and girl respectively.