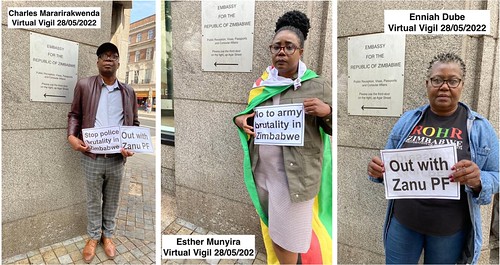 The unprovoked war has helped boost Zimbabwe’s inflation rate to 132% with sharp rises in the cost of imported food, fuel and fertilizer (see: https://www.bloomberg.com/news/articles/2022-05-26/currency-slump-132-inflation-no-cause-for-panic-in-zimbabwe).

The faraway war is also causing lost jobs. Elina Ncube, a former housekeeper at one of the prime lodges at Victoria Falls, now survives by getting up at 4 am to go to the municipal dump in the hope of scavenging food and anything to sell. She said: ‘The war in Ukraine has made the situation even more desperate because most of the tourists that booked at our lodge were from Russia and we were told that most of them had cancelled their bookings.’ (See: https://www.independent.co.uk/voices/campaigns/giantsclub/ukraine-conflict-economic-crisis-zimbabwe-b2087743.html.)

Zimbabwe’s financial crisis has not stopped Mnangagwa paying US$30,000 a flying hour for a luxury jet to take him to the Davos World Economic Forum in Switzerland. His spokesman, George Charamba, has said the President will continue to use hired private jets for his  trips until Air Zimbabwe has planes that are reliable enough to fly in! (See: https://news.pindula.co.zw/2022/05/26/president-mnangagwa-hires-us30-000-per-flying-hour-plane-to-davos/).

His attendance at Davos is waste of time and resources says the Fight Inequality Alliance, a network of Zimbabwean organisations seeking a fair distribution of resources. It said: ‘History tells us that Zimbabwe’s participation at such forums will be driven by the need to attract foreign direct investment under the Zimbabwe is Open for Business mantra. What is however worrisome is the quality of investors we attract since we have had cases of multinational corporations violating the basic principles of business and human rights with impunity.’

It went on: ‘Furthermore, the World Economic Forum has proved to be a platform to consolidate financial and corporate power at the expense of the suffering masses worldwide. We therefore contend that Davos is yet another congregation of elites meant to share ideas and propose policies which favour the corporate world and maximise profits.’ (See: https://www.263chat.com/zimbabwes-participation-at-davos-summit-questioned/).

The Herald boasted of success at the summit and pictures showed a number of Zanu PF supporters greeting the President at Davos. Simba Mavaza, a Zanu PF ‘programme co-ordinator’ who is based in the UK said he was confident that Mnangagwa’s efforts to attract foreign investment would have tangible results – presumably enough to pay him and the other Zanu PF supporters (see: https://www.voazimbabwe.com/a/6589461.html),

The Crisis in Zimbabwe Coalition describes the Zanu PF regime as shameful saying that, through state-owned media, it was accusing them of attempting to destabilise the country and effect regime change. ‘The malicious allegations contained in the state’s propaganda pieces are but a desperate attempt to find a scapegoat for the ZANU PF government’s inability to run the country and its economy,’ it said. (See: https://www.newzimbabwe.com/shameful-crisis-in-zimbabwe-coalition-says-in-damning-response-to-zanu-pf-onslaught/.)