Lusaka – Zimbabwean authorities should immediately drop all charges against journalists Blessed Mhlanga and Chengeto Chidi, as well as Moses Hakata, and let them work freely, the Committee to Protect Journalists said Wednesday. 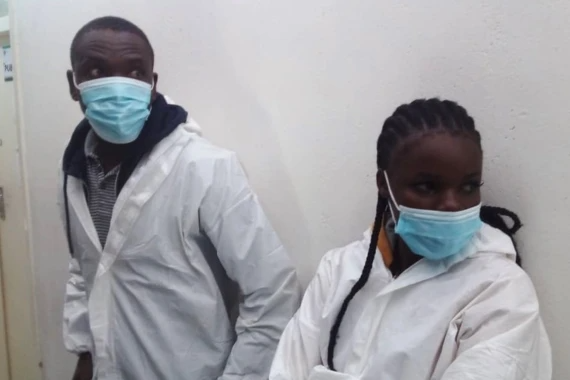 Journalists Blessed Mhlanga (left) and Chengeto Chidi (right) are seen at the Chitungwiza Magistrates’ Court in Zimbabwe on May 9, 2022, after being detained while filming police attempt to arrest an opposition politician. (Photo: News Day)

On Saturday, May 7, police arrested both journalists after they photographed officers attempting to detain an opposition lawmaker in the town of Chitungwiza, south of Harare, the capital, according to news reports, a statement by the Zimbabwean chapter of the Media Institute of Southern Africa, a regional press freedom body, and both journalists, who spoke to CPJ via messaging app.

The journalists were in the area to cover water shortages where a local election was being held, according to those sources.

Police ordered Mhlanga to stop recording their arrest of opposition Member of Parliament Job Sikhala, and after he identified himself as a journalist, an officer proceeded to punch him several times in the head, smashed his cellphone, and arrested him, according to Mhlanga, who also shared video of the incident. Officers arrested Chidi after she went to the police van where Mhlanga was detained to ask him to give her the keys to his vehicle, she told CPJ.

Police also arrested Hakata, a bystander who attempted to dissuade the officer from assaulting Mhlanga, according to media reports and Tapiwa Muchineripi, a lawyer representing both journalists, who spoke to CPJ via messaging app.

Police held Mhlanga and Chidi, both reporters for the privately owned newspaper News Day, at the Harare Central Police Station until Monday, when they were formally charged at the Chitungwiza Magistrates’ Court and released on bail, according to those sources. They are next due in court on May 24, Muchineripi said.

Hakata also appeared at that hearing, where authorities charged him with incitement to commit assault and released him on bail, Muchineripi told CPJ.

“It is outrageous that Zimbabwe police arrested journalists Blessed Mhlanga and Chengeto Chidi, beating Mhlanga in the process, and held them for the weekend simply for doing their jobs and covering authorities’ attempt to arrest a member of parliament,” said Angela Quintal, CPJ’s Africa program coordinator, in New York. “To add insult to injury, police have also filed trumped-up charges against the journalists and bystander Moses Hakata, who sought to help them. Prosecutors should immediately drop the case against all three defendants and stop wasting the court’s time and resources.”

At that court hearing, authorities charged the journalists under sections of the Electoral Regulations Statutory Instrument (SI) 21 of 2005 barring photography within polling stations while voting is in progress, according to news reports and another statement by the Media Institute of Southern Africa, which CPJ reviewed.

The journalists pleaded not guilty and were released after each paying bail of 20,000 Zimbabwean dollars (US$62), according to those sources.

If convicted, they could face up to one year in prison and a fine of up to 70,000 Zimbabwean dollars (US$193), according to Muchineripi and the Zimbabwean criminal code register of fines.

Authorities also filed alternative charges accusing the journalists of disorderly conduct in a polling station, which would be pursued if they are acquitted of the photography charges, according to Muchineripi and a tweet by Mhlanga. If convicted of disorderly conduct, the journalists would face a fine of up to 20,000 Zimbabwean dollars (US$62), according to the Electoral Act.

Authorities also charged the journalists under Section 147(f) of the Electoral Act, which relates to the use of bands, music, or other noise-emitting devices near a polling place, but dropped that charge during the court hearing, according to their lawyer and Mhlanga.

Mhlanga filed a complaint against the police officer who assaulted him and damaged his phone, Muchineripi said. Police returned his broken phone at the request of his lawyers, but kept one of Chidi’s phones and a News Day camera, saying they were “evidence,” according to Mhlanga and Muchineripi.

“I thought about quitting my job as a journalist and told Blessed about it, but I now feel more resolved to go on doing the work I love,” Chidi told CPJ.

When CPJ called police spokesperson Paul Nyathi, he declined to comment. CPJ called and sent text messages to Zimbabwe Electoral Commission spokesperson Jasper Mangwana for comment, but did not receive any replies.