SCORES of Zimbabwe-bound motorists, haulage truckers and passenger buses were stranded in South Africa on Thursday when residents of Musina went on strike protesting poor service delivery by their municipality. 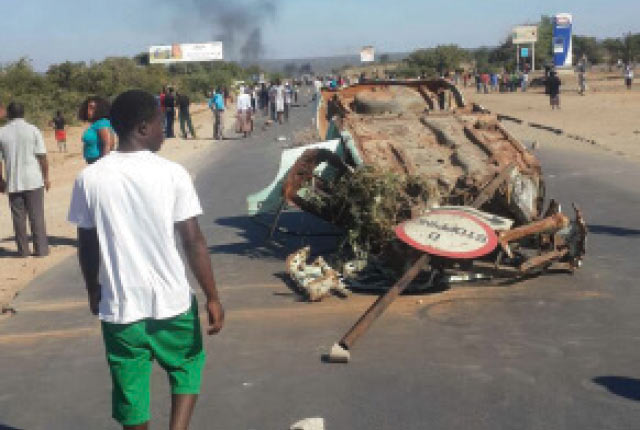 Parts of Musina, particularly the high-density of Nancefield, have gone for three weeks without running water forcing residents to take   to the streets to register their displeasure.

“More arrests are expected…During the protests, community members went on the rampage, blocked and burned tyres on the roads and some shops in Nancefield location and Musina town were looted. The protesters also damaged a police vehicle, torched a municipal tractor and some municipal buildings,” read part of the Saps statement.

“The town is crippled. All shops are closed and youths are toy-toying in protests. They have blocked all the major roads in and out of the town. Blockages are from the tollgate 20 kilometres south of the town where protesters have camped on the N1 Highway,” a shop assistant told Southern Eye from Musina.

“We have been buying water from  vendors because our taps are dry.”

Officials from the Musina Municipality who were part of a South African delegation that toured Beitbridge recently on their way to the Zimbabwe International Trade Fair (ZITF) in Bulawayo said they were keen to get water supplies from Zimbabwe.

“We have to satisfy our citizens first before we export. Plans are there, but we have to deal with our own supplies first,” Masuka said.