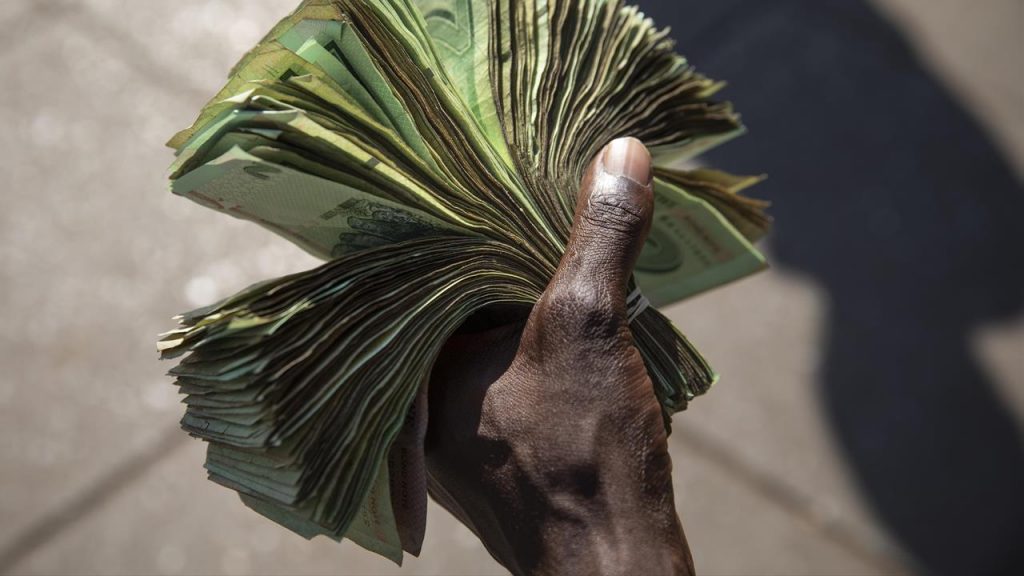 Just before sunrise when the sky was yellow and apricot, a jackal ran out into the road, saw me, turned and ran back into the golden grass. It was a very cold winter morning and there was an icy wind with the temperature hovering around five degrees. The briefest of glimpses of the jackal took me instantly back to my childhood at boarding school when the nuns told us not to go out at night (to the boy’s school down the road) because there were rabid jackals out there. It was a good line which scared us enough so that we didn’t try and bunk out and for sure on those cold winter nights we did hear jackals yipping and barking down in the long golden grass. June is the month of golden grass in Zimbabwe and it does the heart good to get out and see the beauty of our country, it helps us cope with the nightmare that has become everyday life again as economic chaos dominates everything we can and cannot do.

Since my last letter a fortnight ago Zimbabwe’s economic crisis has escalated at a frightening pace. In a fortnight the street rate for one US dollar has gone from 460 to 600 plus while the bank rate continues to trail far behind at 338. Two weeks ago a loaf of bread was Z$469, last week it went up to Z$640 and yesterday it was Z$825 in my home town. The price of bread which has always been around the equivalent of one US dollar was the equivalent of US$1.40 this week and our shopping baskets went empty.

In the last fortnight, fuel went up to US$1.76 a litre but in reality, many pump prices went to US$1.80 plus. Tollgate fees also went up, from Z$300 to Z$520 and last night went up again to Z$700. With a big pile of notes in hand, you approach the tollgates. They vary from big structures with multiple lanes to a roof across the highway and a dirty, battered drum in the middle of the road. Some of these ‘drum tollgates’ are a shock to behold as I found out recently. Two women on rickety black office chairs on wheels are the money collectors; the chairs are well past their prime with bent armrests and springs and foam rubber oozing out of the seats. It was freezing cold, the women have nowhere to shelter from the wind and both had scarves wrapped around their heads. You line your vehicle window as close to the woman on the chair as you can and lean out to hand over the big pile of money. A handheld point of sale ‘fiscal device’ prints out a receipt and the woman with long auburn braids and long false fingernails shivers as she hands over the slip of paper. On the verge alongside the golden grass, a couple more broken black office chairs with broken wheels and no backs lie abandoned. On the right behind a shiny security fence, a security lock and a Zimbabwe flag are a smart building where police sit on the grass in the sun watching the proceedings at the drum. At another tollgate further along the highway, it’s painful to see a woman and child picking up maize pips that have spilt onto the roadside. No chance to offer comfort here, police watching and a big sign saying: ‘No Stopping. No loitering.’

Schools have also reached a new crisis point this week and sent out an SOS to parents for a ‘top up’ of fees saying they had been eroded by inflation. One Headmaster said the school had run out of food and would be forced to close on the 22nd of June, more than a month before the end of term. He wrote to parents  saying: “I will not be able to keep the children at school, hence I will ask you to collect learners from school.” Teachers are also in dire straits, the last review of their salary was back in February when the rate was Z$210:US$1 and its now 600:1. The Zimbabwe Teachers Union said: “A whole salary cannot buy a formal pair of shoes from local manufacturers.” (ZimLive)

Meanwhile, as the crisis escalates the government is blaming us, saying it is companies engaged in “speculative and unethical behavior” causing the problem. President Mnangagwa told people in Murewa last week: “I know you are suffering because of price issues, especially in the food sector. They are doing this to sabotage us; they want you to turn against us.” Meanwhile the Finance Minister, Mthuli Ncube was on a completely different page and he said that “all is well” in Zimbabwe. “What crisis?” he said. “We are performing well. We have put measures in place to fight inflation, people should not panic, everything is in order.” (Newsday)

With all this swirling in my head, my mind went back to the glimpse of the jackal in the golden grass at first light in our beautiful, beleaguered country and the words shouting in my head: Crisis? What crisis?
Click here to see the picture:   https://cathybuckle.co.zw/crisis-what-crisis/