Lusaka – On Monday, police in Bulawayo in southwest Zimbabwe detained Mduduzi Mathuthu, editor of privately-owned news website ZimLive, and charged him with insulting or undermining the authority of President Emmerson Mnangagwa over a tweet he wrote about the president’s fiscal policies, according to news reports and a statement from the regional press freedom group, Media Institute of Southern Africa. The journalist was released about an hour later and police told him they would later set a date for a court hearing, according to Mathuthu and his lawyer, Nqobani Sithole, who both spoke to CPJ via messaging app. 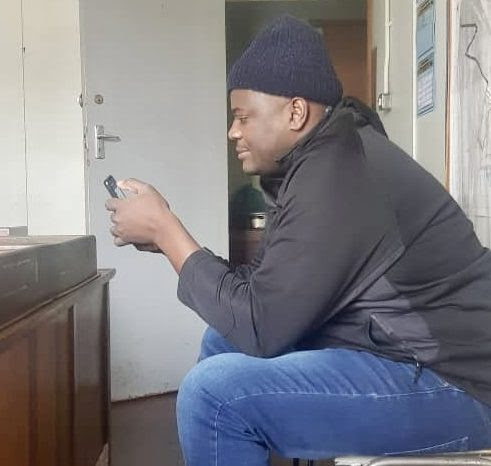 ZimLive editor Mduduzi Mathuthu as pictured at the police station where he was summoned June 6. (Credit withheld)

“Authorities in Zimbabwe should stop harassing ZimLive editor Mduduzi Mathuthu, a known critic of the government, and immediately drop the spurious charge of insulting or undermining the president’s authority,” said Angela Quintal, CPJ’s Africa program coordinator in New York. “Presidents are public figures and should have a greater tolerance for criticism and debate without the police having to waste resources to defend their reputations.”

Mathuthu appeared for questioning on Monday, June 6 at the Bulawayo central police station, following a summons on June 1 in which the police said – without giving further details – that they were investigating a case against him, Sithole said. During the questioning, police said they were charging him over his tweet, since deleted, about Mnangagwa’s suspension of bank lending to private companies and government departments. CPJ has reviewed the tweet.

If found guilty, Mathuthu faces one year in jail or a fine of up to 4,800 Zimbabwean dollars (US$13.26) or both, according to the law.

CPJ called Zimbabwe police spokesperson Paul Nyathi and also sent a request for comment via messaging app but did not receive a reply.