Taurai Muzhingi is the winner of the Kids Moving Forward chess tournament which was held at King Solomon Academy in Chinhoyi on the 9th of July 2022. 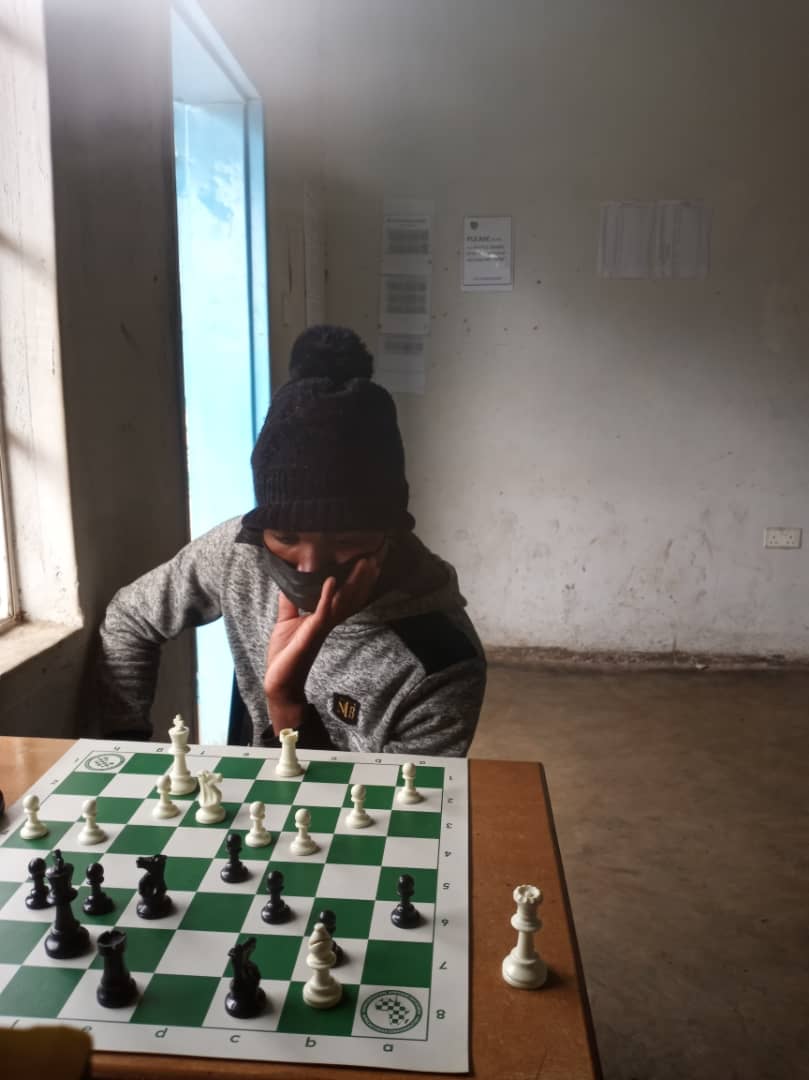 This was a seven round rapid chess tournament which had International Arbiter Simbarashe Murimi as the Chief Arbiter assisted by FA Chimbamu and Kahoba Lewis  Fide Trainer. Muzhingi started with a win in round one but fell to Murugani  Mike in a pulsating game in which he was left clutching thin air after some brilliant moves from the man who also escaped from the jaws of defeat against Lameck Gomera in round one.

After his loss he trailed Tinashe Chinhanga for the greater part of the day until they met in round five and Muzhingi mercilessly defeated Chinhanga to claim the top spot though they were now tied with the same number of points. They were now tied on four points. The last two games were very interesting as it was a battle of the minds as well as the top spot. Murisa Macmillan played against Muzhiungi in round five , while Chinhanga faced Gomera. The two leaders won their games and continued with their wins moving to round seven on the same number number of points which is five points.

Taurai Muzhingi played against Gilbert Shonhiwa Gilbert in round seven and Muzhingi prevailed over Shonhiwa to finish with 6 points. Tinashe Chinhanga played against Lewis Kahoba in a pulsating game , which could have gone either way. Eventually Chinhanga prevailed after forking the Castle and pressing him for a mate which was inevitable and the game ended with Tinashe Chinhanga finished with 6 points as well as Muzhingi who had a better buccholz than his compatriot. The two players shared first and second position prizes of $50 and $35 respectively equally as they both finished with the same points .Tafadzwa Sibanda came third and won $25. He was also the best local player and he collected another five dollars on top to make it $30.

Linda Shaba was the best lady with 4 points and was tied on fourth position together with Gilbert Shonhiwa,Murisa Macmillan, Gomera Lameck and Kahoba Lewis. Linda Shaba won $40 for being the best lady who wrestled the men who were very powerful over the board. Shwas equal to the task as she dismissed some of these male players. Gabriella Gandawa was the best young player and she collected $10 for her efforts.

The tournament had 16 players who took part and certainly next year will be bigger and better. The tournament was proudly sponsored by Mhondoro chess and was organized by Kids Moving Forward. Kids Moving Forward was represented by Tanaka Howard. Special mention goes to Zimbabwe Chess Federation for the provision of chess sets and clocks which were used during the tournament. This builds a symbiotic relationship in chess and certainly chess is moving forward and is the winner.

For more results details you can go on www.chess-results.com.