There was something unseemly about Mnangagwa’s hasty reception of the controversial result of the Kenyan presidential election this week. He was among the first African leaders to applaud the outcome, along with the presidents of Ethiopia and Somalia, well before South Africa and other countries joined in the congratulations. 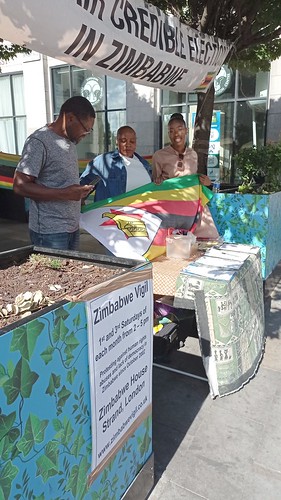 The fact that a majority of the Kenyan electoral commission refused to accept the narrow result didn’t seem to matter to them. but it certainly mattered to the loser, Raila Odinga, who condemned the handling of the election (see: http://www.zimvigil.co.uk/vigil-news/campaign-news/1236-kenya-election-watchdogs-split-amid-violence-as-poll-winner-is-declared).

Sadly election rigging has become widespread – indeed in some countries such as Russia and China it is institutionalised! An article in Newsday says there is a feeling in Zimbabwe that next year’s election will be characterised by violence – even to the extent experienced in 2008, when Mugabe refused to step down after clearly losing the vote.

The article says the election preparations in Zimbabwe are already a shambles and that election observers from SADC and the AU are unlikely to meet credible conclusions. ‘It will be difficult to answer the question of whether the polling was free and fair or even who won.’ (See: https://www.newsday.co.zw/2022/08/zanu-pf-determined-to-win-at-all-costs/.)

The Committee to Protect Journalists (CPJ) has condemned the decision of Zimbabwe’s censorship board to ban a documentary film ‘President’ by the Danish journalist Camilla Nielsson. The film followed opposition leader Chamisa’s presidential campaign in the 2018 elections. It alleged vote rigging, intimidation, fraud and political violence by Zanu PF.

The censorship board said it had banned the film because it was ‘likely to be contrary to public order and incite violence ahead of the elections’. The CPJ said the board’s decision seemed to be less about stopping incitement to violence and more about insuring that Chamisa ‘does not get free publicity ahead of a crucial election’. (See: https://www.zimbabwesituation.com/news/zimbabwes-censorship-board-bans-danish-documentary-about-opposition-leader/.)

Foreign lawyers for the imprisoned CCC national chairperson Job Sikhala say his prosecution has exposed Zanu PF, the police and judiciary as the ‘new black colonialists’. Sikhala has been languishing in remand prison since June facing charges of inciting public violence following the murder of opposition supporter MoreBlessing Ali.

The lawyers, Amsterdam and Partners, said ‘It is not that we seek to replace the local lawyers, but rather machinery of justice that is irretrievably broken by the Zanu PF and their government that has been hallowed by all its actions to date.’ (See: https://www.newzimbabwe.com/sikhala-case-exposes-zanu-pf-police-and-judiciary-as-new-black-colonialists-says-expatriate-lawyers-barred-from-practicing-in-zim/.)

The man who best fits the description of ‘black coloniser’ is perhaps the late Robert Mugabe, who ironically has just been honoured as one of southern Africa’s founding fathers at a SADC summit in the DRC. Grace Mugabe received the award on his behalf and posed for photos with President Mnangagwa.

The award was described as a way of honouring SADC’s founding fathers for setting the foundations for a common future for the region. One has to laugh (see: https://www.zimbabwesituation.com/news/sadc-honours-mugabe/).