Following the latest political violence in Zimbabwe, the CCC Vice-President Tendai Biti has predicted that things are going to get worse than they were after the last elections in 2018 when the military was unleashed to put down demonstrations. Six people were killed and dozens injured. 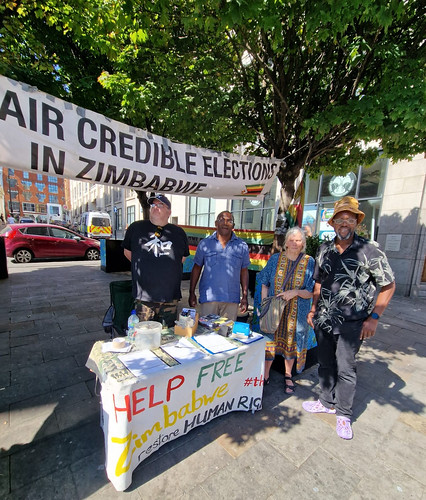 Biti said the failure to implement the recommendations of the commission of enquiry headed by former South African President Motlanthe and to deal with perpetrators of political violence had encouraged a culture of impunity. ‘Only last week, we had activists who were thoroughly beaten up in Mutoko for just putting on yellow t-shirts,’ he said. ‘A week ago, my car was stormed in Muzarabani. We have had the murder of Moreblessing Ali last month. We have the incarceration of the Nyatsime 13, that of Job Sikhala and Godfrey Sithole. It is quite clear that things are going to be worse than 2018.’

Biti continued: ‘We urge the SADC leadership to intervene. The situation in Zimbabwe is abnormal, the situation in Zimbabwe needs international intervention.’ He added that violence was in the DNA of Zanu PF and now that social and public services had collapsed there was likely to be a greater acceleration of closure of the political space as the election approached (see: https://www.newzimbabwe.com/biti-urges-international-intervention-in-abnormal-zim-situation-warns-that-things-are-going-to-be-worse-than-2018/).

The Zimbabwe Election Commission has rejected a request by CCC for a bilateral dialogue on alleged electoral malpractices. It said it did not have meetings with individual stakeholders to the exclusion of others. CCC spokesperson Fadzayi Mahere said there was no law prohibiting ZEC from engaging bilaterally on electoral concerns (see: https://www.newsday.co.zw/2022/08/zec-shuts-out-ccc/).

These concerns have worsened with the appointment to ZEC of more relatives of Zanu PF leaders. The latest is former Vice-President Kembo Mohadi’s daughter, Abigail Millicent Mohadi Ambrose, as one of its electoral commissioners. She joins at least two other children of ZANU-PF stalwarts on the commission like Cathrine Mpofu, the daughter of former mines minister Obert Mpofu and Kudzai Shava, son of current foreign affairs minister Frederick Shava.

Civil society groups have warned of a conflict of interests. ‘The fact that Abigail Ambrose’s father Kembo Mohadi is an interested party in Zimbabwe’s elections is enough to dismiss her appointment as part of a patron-client relationship which is detrimental to the conduct of credible elections,’ a report by the Zimbabwe Democracy Institute says.

‘The credibility of ZEC has been thrown into question,’ Harare-based political analyst Rashwhit Mukundu told Al Jazeera. ‘The nomination of individuals who have notable conflict of interest demonstrates the lack of commitment to genuine electoral reforms by Emmerson Mnangagwa.’ Stephen Chuma, CCC interim spokesperson was even more scathing. He said ZEC was now the ‘Zanu PF Electoral Commission and called for a wave of protests to press for electoral reforms (See: https://www.aljazeera.com/features/2022/8/1/zimbabwe-electoral-appointments-spark-controversy-ahead-of-2024.)