if there is, Parliament has done it before 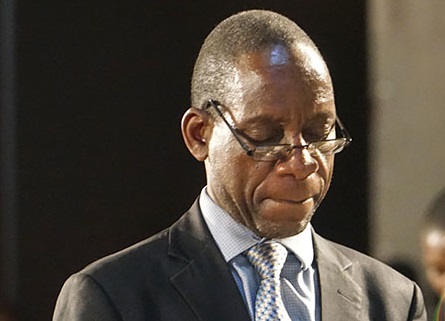 “If this whole provision is read together with s 67 (3), as it should since it addresses the same issue, the simple meaning is that while para 1 (1) gives the right to vote to every Zimbabwean citizen of or over 18 years of age, that right alone is not enough. It merely qualifies the citizen for registration as a voter, something that he is then required to do. The registration must be effected on a voter’s roll, and that voters’ roll must relate or ‘belong’ to, a given constituency. However, by virtue of para 1 (2) additional residential qualifications may be prescribed, and these would, as it were, complete the package of voting requirements to be met before a citizen is allowed to vote

Let me point it out very clearly here that those who argue that the constitution must be amended are failing to interpret paragraph 1(2) of the Fourth Schedule of the Constitution, which reads “The Electoral Law may prescribe additional residential requirements to ensure that voters are registered on the most appropriate voters roll, but any such requirements must be consistent with this Constitution, in particular with section 67″. This shows that the constitution does not necessarily have to be amended, but the Electoral Law can be amended to allow Diaspora based Zimbabweans to register to be on the voter’s roll for a particular interest in Zimbabwe, and be allowed to vote the same way the Electoral Law allows Zimbabweans working at Ambassies to vote from outside the constituency they are registered. Embassy staff do not reside in a constituency in Zimbabwe, but what allows them to vote is the Electoral Act, so the same rights which have been extended to Embassy staff can be extended to the Diaspora Zimbabweans who are covered by Section 67 of the constitution. Amending the Electoral Law will, as said in the Constitutional Court judgment in the Shumba and two others’ case, “complete the package of voting requirements to be met before a citizen is allowed to vote”

What stuck in the heads of those who think the constitution must be amended to allow the diaspora to vote were the words by Mrs Munyoro, who was defending the Minister of Justice, Minister of Foreign Affairs who said in court ”

“Thus, if the applicants feel strongly about the diaspora vote, they should petition Parliament to amend the Constitution”, and that was a mere opinion, not fact. The fact that remains is, if I may repeat, The Electoral Law may prescribe additional residential requirements to ensure that voters are registered on the most appropriate voters roll.
Reading the judgment in the Shumba and two others’ case, it is very clear that they were various reasons that made the application fail, among them the fact that the applicants had filed their application in terms of s 85 (1)(a) of the Constitution, not under s 85 (1)(c) or (d), which permit an applicant to seek relief on behalf of other persons besides him or herself. Also, the main reason was that while section 67 gave them the right to vote, that right was not possible because of provisions of the Fourth Schedule of the constitution, but the same Fourth Schedule allows amendment of the Electoral Law to give additional residence requirements, the same way it has given additional residence requirements for Zimbabweans who work at Embassies. The court could not rule in their favour because of the current discord between the Constitution and the Electoral Law.
What is interesting in Professor Madhuku is that he admitted that some good thinkers within Poland had realised the need for diaspora vote, but were convinced by Zanu PF that the diaspora vote was impossible without amending the constitution. Dear Professor, who danced to the Zanu PF song. You were overjoyed by being given cars and other benefits and pretended you did not understand the Constitution and sold out the Zimbabweans in the Diaspora who want their democratic right as enshrined in the constitution implemented through amendment of the Electoral Law. Please learn to stand your ground. You would have been a hero if you had refused to give in to Zanu PF and signed that stupid document.
Professor Madhuku and Minister Ziyambi Ziyambi insist that the diaspora vote cannot be implemented because it requires a constitutional change. One then asks, is the Constitution of Zimbabwe written on concrete? Parliament has already amended the Constitution to scrap the need for presidential run mates, denying the citizens a right to right to elect a Vice-President who will take over in the event that the President is not able to complete their term of office. Wouldn’t it be better to amend the Constitution to give Zimbabwean citizens living abroad their right to vote than to amend it to take away the right for citizens to elect a person who can take over the country’s leadership if the elected President vacates office mid-term?
The truth seems to be that Zanu PF does not like the diaspora vote as it assumes that every Zimbabwean in the diaspora is in the opposition. The truth is that there are millions of Zimbabweans in the diaspora, but less than a tenth of them are actively involved in opposition politics. Zanu PF has structures as well even in the United Kingdom. The party tries to use various excuses that do not work, and it is time SADC, the African Union and the United Nations who are receiving this letter, to start seeing Zanu PF and their surrogates in Polad for who they are. Remember Professor Madhuku saying at a funeral that he had tricked Mnangagwa and got a car to use to drive to bury his relatives at the expense of tax payer.
In ALL engagements with Zimbabwean officials, SADC and the SADC Parliamentary Forum, The African Union and the Pan-African Union, and the United Nations and the Inter-Parliamentary Union and other regional and global bodies must remind the Zimbabwean authorities that they must democratise the electoral process by giving citizens resident outside the country their right to vote, just as other fellow African countries extend voting rights to their citizens living abroad.
Ziyambi Ziyambi has been playing games. in 2019 he said a study was to be commissioned to study the diaspora voting patterns in other countries. I even begin to suspect that even President Mnangagwa was playing games when he announced to Zimbabweans in the United States of America in 2018 that all efforts will be made to provide the logistics to allow Zimbabweans to vote in 2023.
If a President of a country says there will be a diaspora vote, how come he seems to be wiped into line by his minister? How come Professor Lovemore Madhuku does not ask the President why he thinks there can be no diaspora vote when he told citizens that they may vote in 2023 if enough ground has been covered in terms of putting in place the necessary framework and logistics for that to happen? Surely, Professor Madhuku must have a good memory to remember that only last year Parliament amended the constitution to scrap the Presidential running mate provision, how came he doesn’t argue in Polad for an amendment of the Constitution to allow diaspora vote – that is if an amendment of the constitution is even necessary?