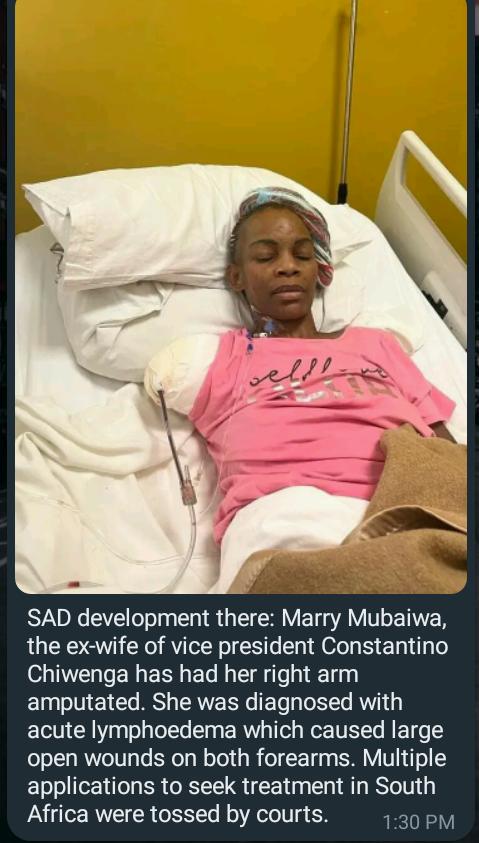 The ailing Marry Mubaiwa has been critically ill for several months after she was diagnosed with acute lymphoedema. Several applications to seek treatment in South Africa were rejected by the courts.

Back in March, doctors advised Marry that her right arm should be amputated.

Beatrice Mtetwa, her lawyer, revealed that her doctors had recommended that her right hand be amputated above the elbow due to severe sepsis.

She had been battling lymphoedema, a condition caused by a blockage in the lymphatic system, part of the immune and circulatory systems. The illness left her arms and legs badly swollen with “wart-like” growth and extensive scarring.

According to the Centers for Disease Control and Prevention (CDC), Sepsis is the body’s extreme response to an infection. It is a life-threatening medical emergency. Sepsis happens when an infection you already have triggers a chain reaction throughout your body. Infections that lead to sepsis most often start in the lung, urinary tract, skin, or gastrointestinal tract. Without timely treatment, sepsis can rapidly lead to tissue damage, organ failure, and death.

Below is part of the letter from the doctors who examined Marry in which they recommended that her right hand be amputated in order to save her life.

Recommendation: Right High Above Elbow Amputation
I had the pleasure of assessing Marry Mubaiwa on behalf of my senior colleague Mr Mthethwa. She is 5 weeks post revision surgery for a right humerus shaft re-fracture.

Her current condition is critical (life-threatening) and has necessitated hospitalization and stabilisation with a plan for emergent right high above elbow amputation as soon as she is deemed medically stable.

She has severe sepsis secondary to deep infection after revision surgery to fix a re-fracture of right humerus shaft against a background of chronic sepsis in her forearm.

Careful in-patient clinical management of her current state is required, and a multi-disciplinary team is in attendance.

Marry had been fighting for permission to seek specialist medical care outside of the country since the recommendation to amputate her arm was made.

Despite numerous court applications, the permission was always denied.

The former second lady has been arrested several times and is being charged with attempted murder. This comes after Vice President Constantino Chiwenga claimed that Marry attempted to murder him while he was incapacitated in a South African hospital.

The 39-year-old is also accused of money laundering and foreign currency externalisation, as well as fraud and misrepresentation, for allegedly secretly planning to upgrade her marriage without Chiwenga’s knowledge or consent. – DailyNews