Zimbabweans living in South Africa may need to leave under new rules that also could spur economic blowback. 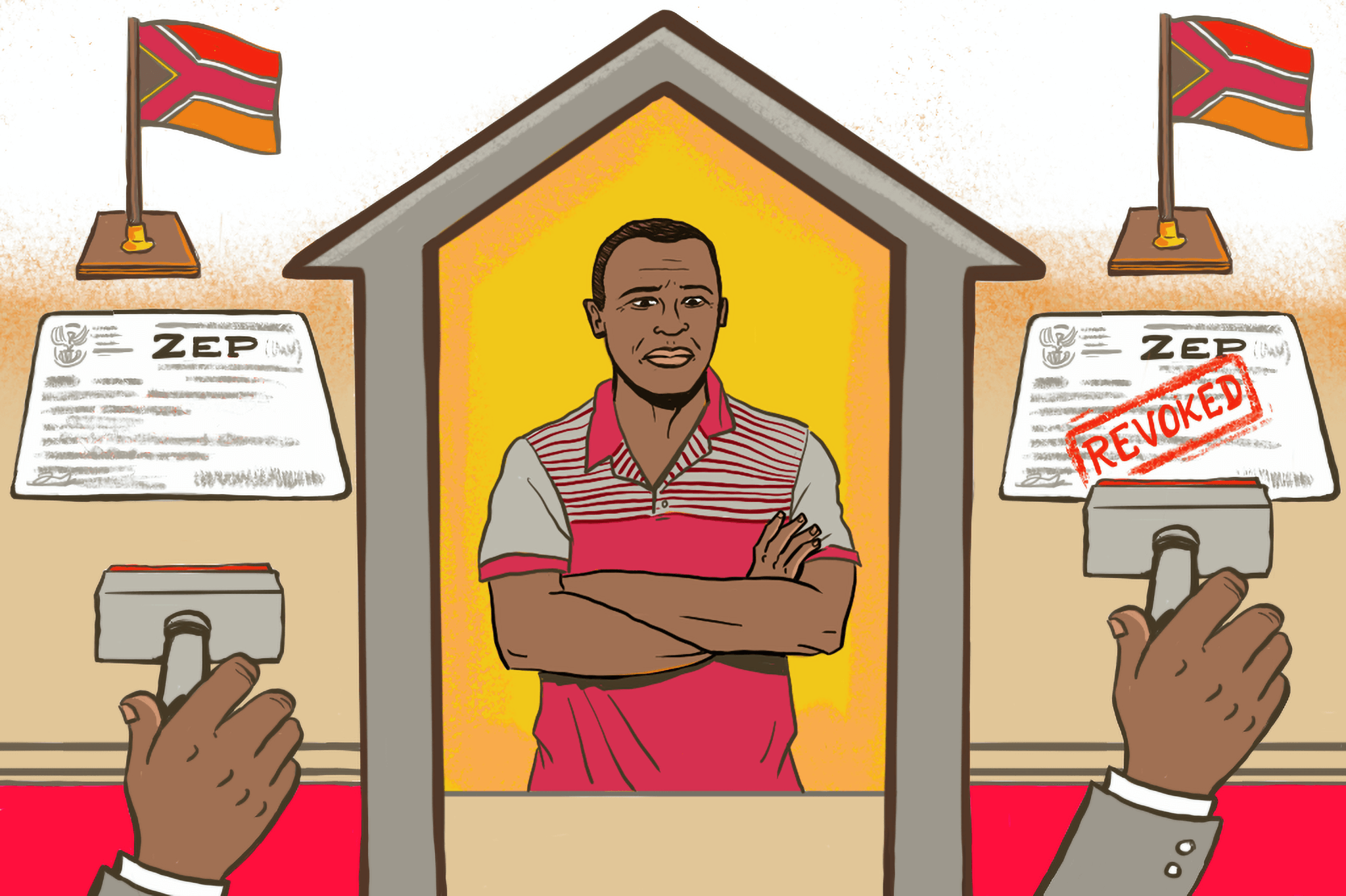 HARARE, ZIMBABWE — If not for the economic hardships she faced in Zimbabwe, Olivia wouldn’t have left her home country.

She engaged in cross-border trading, which entailed selling various products in neighboring countries like Botswana. It wasn’t making her much money, so she decided to join her husband, who was already living in South Africa. For the last 15 years, Olivia, who asked to use only her first name to protect herself from legal repercussions, has lived and worked there with her family. She has a permit to live there, a job that pays enough to afford school fees for her three children, a bank account and a driver’s license.

But like many Zimbabwean immigrants living in South Africa, the future is uncertain for Olivia. Her life might be upended following an announcement by the South African government that it will revoke the Zimbabwean Exemption Permit (ZEP) held by about 180,000 Zimbabwean immigrants. “This came at a time when I least expected it,” she says. “I was not prepared to deal with the stress and anxiety that comes with not having a legal permit.”

The situation exemplifies the unintended consequences of strict immigration policies for both countries. Zimbabweans living in South Africa on the exemption permit may be forced to return to a country that’s grappling with the same issues that pushed them out in the first place. But South Africa faces possible economic consequences, given immigrants’ contribution to the country’s economy.

The Zimbabwean Exemption Permit, which allows Olivia to work in South Africa, was part of a series of regularizations implemented by the South African Cabinet to reduce pressure on the country’s asylum system.

According to a January press release issued by South Africa’s minister of home affairs, 2008-2009 marked a steady rise in the number of nationals from the South African Development Community — a regional intergovernmental organization made up of members from the southern Africa region — seeking asylum in South Africa. Many of them were from Zimbabwe. In response, the South African Cabinet implemented the Dispensation of Zimbabweans Project in 2009, which granted exemptions to asylum seekers.

It was a temporary solution, followed by renewals — the Zimbabwean Special Dispensation permits of 2014 and 2017 — granting additional years to those on previous permits who wished to remain in South Africa.

But in January, the South African government announced it will no longer renew the regularization permit. The decision was due to a culmination of factors, including the high cost of processing extensions and exemptions, according to a statement by South Africa’s minister of home affairs.

The statement also cites budget constraints, partly because of economic aftershocks related to the pandemic; lack of resources to handle the high number of appeals from asylum applications; and a 1.8% increase in levels of unemployment in South Africa, the highest since 2008.

The announcement gave Zimbabweans living in South Africa on the exemption permit a deadline of December, later extended to June 2023, to apply for the visa options available under the Immigration Act, which regulates immigration into South Africa. The options include work visas or permanent residence permits.

But Gabriel Shumba, chairperson of the Zimbabwe Exiles Forum, a nonprofit formed by Zimbabweans living in South Africa and neighboring countries, says in a written response that many permit holders don’t meet the qualifications for the visas in the critical skills list. This list, issued by South Africa’s Department of Home Affairs, outlines the skills and qualifications necessary for a work permit or permanent residence permit.

Even the few who qualify will most likely face hurdles, Shumba says. For example, applicants for general work visas need certificates from the labor department to justify their employment, but these certificates are rarely approved, he says. More than 80 organizations wrote to South Africa’s minister of home affairs in November to request a relaxation of some of the requirements, but nothing changed. “Many of those on ZEP see these impediments as deliberate,” Shumba says.

The South African Embassy in Zimbabwe and South Africa’s Department of Home Affairs didn’t respond to requests for comment.

Olivia, who does domestic work, can’t apply for a work visa or permanent residence, as her skills aren’t recognized in the critical skills list. Her options are limited. She will either remain as an undocumented immigrant and risk deportation, or willingly return to Zimbabwe.

But returning to Zimbabwe is not an option Olivia wants to consider.

“My first-born child was recently accepted in the university and got a study permit,” she says. “My second-born child was born here and awaiting to get a South African identity card after attaining 16 years. My husband has a refugee status. What do I go back home for?”

Immigrants account for about 5% of South Africa’s population, according to the Migration Policy Institute, a Washington-based nonprofit that analyzes the movement of people worldwide. The number could be higher, as it doesn’t account for unauthorized immigrants. Zimbabweans make up about 24% of the country’s total immigrant population.

Many of the factors that have led the waves of migration from Zimbabwe to South Africa have not yet been resolved, says Eldred Vusimuzi Masunungure, director of the Mass Public Opinion Institute, a research institute in Zimbabwe. “Zimbabweans will be coming back to a country with record unemployment, inflation and a syndrome of crisis,” he says

Once known as the breadbasket of Africa, Zimbabwe won independence from Britain in 1980. But two decades of government overspending, corruption, one-party rule and the rocky implementation of reforms — including controversial land reforms in the early 2000s — have led to the most severe economic downturn in a country not at war, according to a 2019 report jointly published by the World Bank, the United Nations and the African Development Bank. Roughly 1 in 5 Zimbabweans currently face food insecurity, according to estimates from the Famine Early Warning Systems Network.

The country’s GDP dropped by nearly half between 1999 and 2008, according to the 2019 report, and while the country recovered from the hyperinflation era of 2009, inflation is back, with the cost of basic goods skyrocketing.

The official unemployment rate in Zimbabwe, which counts subsistence farmers as unemployed, is 20%. However, most of the country’s labor force works in the informal economy. These jobs tend to be unstable with low wages and no employment benefits. The coronavirus pandemic, which hit when the country was already undergoing recession and hyperinflation, intensified the economic instability.

The country’s current situation worries Eva, who requested only her first name be used for fear of retaliation from immigration officials. Although she is contemplating a return to Zimbabwe because she doesn’t meet the qualifications to apply for a work visa or permanent residence, she worries that she will not earn the kind of money she is making in South Africa, where she transports children to school and runs a small catering business. Already, her husband attempted to return to Zimbabwe, and his experience was anything but encouraging.

“He stayed in Zimbabwe for six months, and he came back after he failed to find a job,” she says.

The move will also be a big shift for her daughter, who is in her first year of secondary school and will have to adjust to a new school system in Zimbabwe. She “had the greater part of her primary school here in South Africa, and I am sure the move of going back home will affect her education,” says the mother of four.

The move could also have economic consequences for South Africa, given the role immigrants play in boosting its economy. A 2018 World Bank report that assessed the impact of immigration in South Africa between 1996 and 2011 found that each immigrant worker created roughly two jobs for South Africans.

Immigration could also boost per capita income in South Africa by up to 5%, according to a 2018 joint report by the OECD Development Centre and the International Labour Organization. The study also found that immigrants tend to pay more in taxes than native-born South Africans.

Livit Mugejo, spokesperson for the Ministry of Foreign Affairs and International Trade in Zimbabwe, says that the suspension of these permits doesn’t mean that Zimbabweans are no longer allowed to work and stay in South Africa. He advises them to apply for visas in accordance with South Africa’s immigration laws.

“When the decision to issue the ZEP was made, the plan was that the permit holders would subsequently migrate to normal visa categories of South Africa just like any other immigrant from other countries,” Mugejo says. “It was never to keep renewing ZEP.”

He urges permit holders to comply with South Africa’s policy. “Zimbabwe has no option rather than to respect such a decision based on the sovereign laws of that country,” he says. “Our embassy in South Africa will continue to engage with the South African government to make sure that correct information is disseminated to our people and avoid the misinformation.”

But Shumba, of the exiles forum, says Zimbabweans’ contributions to their adopted country should mean something in determining their ability to stay. “They have established over 11 years’ bonds of kinship, mortgage bonds, policies and properties,” he says. It is home.

Gamuchirai Masiyiwa is a Global Press Journal reporter based in Harare, Zimbabwe.