The ancient city of Great Zimbabwe was an engineering wonder. But archaeologists credited it to Phoenicians, Babylonians, Arabians – anyone but the Africans who actually built it. 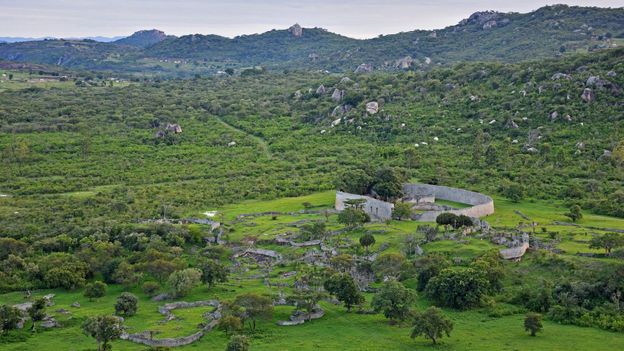 Walking up to the towering walls of Great Zimbabwe was a humbling experience. The closer I got, the more they dwarfed me – and yet, there was something inviting about the archaeological site. It didn’t feel like an abandoned fortress or castle that one might see in Europe: Great Zimbabwe was a place where people lived and worked, a place where they came to worship – and still do. It felt alive.

Great Zimbabwe is the name of the extensive stone remains of an ancient city built between 1100 and 1450 CE near modern-day Masvingo, Zimbabwe. Believed to be the work of the Shona (who today make up the majority of Zimbabwe’s population) and possibly other societies that were migrating back and forth across the area, the city was large and powerful, housing a population comparable to London at that time – somewhere around 20,000 people during its peak. Great Zimbabwe was part of a sophisticated trade network (Arab, Indian and Chinese trade goods were all found at the site), and its architectural design was astounding: made of enormous, mortarless stone walls and towers, most of which are still standing.

However, for close to a century, European colonisers of the late-19th and early-20th Centuries attributed the construction to outsiders and explorers, rather than to the Africans themselves.

Indeed, the author of the first written European record of Great Zimbabwe seemed to be staggered by the very idea that it could have been built at all. Portuguese explorer Joao de Barros wrote in 1552 that, “There is masonry within and without, built of stones of a marvellous size, and there appears to be no mortar joining them.”

Visitors who come to Great Zimbabwe today can still explore three sections: the Hill Ruins (the oldest, with an acropolis believed to be a royal city); the Great Enclosure (surrounded by a large, high wall and containing an 11m conical tower); and the Valley Ruins (a collection of mud-brick houses where the majority of the ancient population lived). Cynthia Marangwanda, a writer, poet and heritage specialist who writes about Zimbabwean national identity, explained that “some people want to call it ‘the Great Zimbabwe ruins’, but I disagree with that: considering the kind of European meddling it has endured, it has stood up very well.”

Built between 1100 and 1450 CE, Great Zimbabwe was large and powerful (Credit: evenfh/Getty Images)

In the Shona language, zimbabwe translates approximately to “stone house”, and because of the site’s size and scope, it became known as Great Zimbabwe. Moreover, it was not the only such “Zimbabwe”: there are remains of approximately 200 smaller settlements or trading posts spread across the region, from the Kalahari Desert in Namibia to Mozambique.

According to Munyaradzi Manyanga, a professor of archaeology and cultural heritage at Great Zimbabwe University, the position of Great Zimbabwe among these settlements has been widely debated. Some people have speculated that it was a capital city of a very large state, but to Manyanga, that seems unlikely. “Such a state would have been too large. One wouldn’t have been able to manage that kind of extent and size. So most of the interpretations talk of these as having been influenced by Great Zimbabwe.” He added that the Kingdom of Zimbabwe is considered to be made up of Great Zimbabwe and the smaller settlements located closer to it.

One of the most remarkable features of the site is its walls. As Manyanga explained, “The style and scale of dry-stone walling that constitute Great Zimbabwe is unparalleled elsewhere in Africa and beyond.” The walls of the Great Enclosure are 6m wide and 11m tall, and they run about 250m, making the enclosure the largest single structure in sub-Saharan Africa and the second largest on the continent by total area: only the pyramids in Egypt exceed them in size according to Manyanga.

The walls, which are made of granite, are stacked precisely and do not use any mortar to hold them in place (Credit: 2630ben/Getty Images)

The walls, which are made of granite, are stacked precisely and do not use any mortar to hold them in place. “The quarrying of the granite, taking advantage of natural processes of weathering and the shaping of it into regular blocks was a major engineering undertaking by these pre-colonial communities,” Manyganga said. Iron metallurgy was needed to make the tools required to cut the blocks; it was also needed to make trade goods subsequently found at the site. All of this points to a highly organised and technologically advanced society.

The population of Great Zimbabwe began to decline in the mid-15th Century as the Kingdom of Zimbabwe weakened (possible theories for the decline include a drop in mining output, overgrazing by cattle, and depleted resources), but the site itself was not abandoned. Manyganga explained that it was regularly visited by different Shona groups for spiritual reasons right up until colonisation by the British in the late 19th Century.

“The racial prejudices of the time could not imagine that the grandeur of Great Zimbabwe could be associated with African populations, who at that time were living very rural lifestyles in small huts on hills,” said Manyanga. Initial explorers assumed that it had to be a long-lost European civilisation or the site of something mentioned in the Bible. For example, in 1871 gold-seeker Karl Mauch believed he’d found King Solomon’s Temple (raising hopes that his gold mines must be nearby) or the palace of the Queen of Sheba. British archaeologist James Theodore Bent, after leading a dig in 1891, wrote a book declaring that Africans were not capable of building what he’d found. Bent even threw away artefacts that would have proven that the site did not date back to Biblical times.

Europeans of the late-19th and early-20th Centuries attributed the construction to outsiders and explorers, rather than to the Africans (Credit: Agostini/Getty Images)

A decade later, in a speech to the Royal Geographic Society, British journalist Richard N Hall supported Bent’s perspective after visiting the site himself. He talked about the artistic value of soapstone carvings that had been unearthed and the “marvellous cleverness” of a gold-mining operation that spanned hundreds of mines, before concluding that “it is quite a moral certainty that even the cruder methods of [these sciences’] application were imported from the Near East, and did not originate in South-East Africa.” Instead, he and his colleagues held that Phoenicians, Arabians or Babylonians created the city.

According to Manyanga, “They wanted to use [this explanation] as a moral justification for colonising Zimbabwe. If there was this long-lost civilisation in this part of the world, there was nothing wrong with colonialism because they were resuscitating this old kingdom.”

However, a few archaeologists of the time countered that the site was not nearly old enough to be from Biblical times. “The then-colonial government suppressed these views, and the official narrative in public media and museums was that Great Zimbabwe was of foreign origins,” said Manyanga. This version of history was upheld through the 1960s and 1970s by the white-minority government of the colony. Only in 1980, when Zimbabwe achieved independence, could the new leaders finally affirm that the site was built by their own ancestors. During the 1960s, black nationalists had even settled on Zimbabwe as the name for the country they hoped to lead to freedom, harkening back to Great Zimbabwe.

“It was Africans who created this, and over a millennium later it’s still standing. It’s a testament to who we are.”

Since 1980, local archaeological research has been slow to resume and has dealt largely with maintenance and repair. Research has instead focused on the satellite sites, in part because they were less disturbed by early excavations. Manyanga emphasised that scholarly understanding of Great Zimbabwe has shifted. “Eurocentric models interpreted the site as though you were looking at a castle in Europe. What has come to light from recent work is that Great Zimbabwe was built over a long period of time; it was not built once and then occupied, but grew over time. Even the walling came at a later stage because earlier on there were farming communities at Great Zimbabwe.”

Today, the great ancient city remains just as important for Zimbabweans. Shona villages are located nearby, and many residents work to maintain the site. A religious centre is close by too, and the site still attracts worshippers who practice traditional Shona faiths.

“It was Africans who created this,” said writer Marangwanda. “And over a millennium later it’s still standing. It’s a testament to who we are.”

BBC Travel’s Lost Civilisations delves into little-known facts about past worlds, dispelling any false myths and narratives that have previously surrounded them.