The Climate Story Lab ZA, a much-needed incubator of impact strategies for imaginative projects by Southern African creatives, aimed at amplifying communication about the global climate crisis, closes for submissions on 7 October. 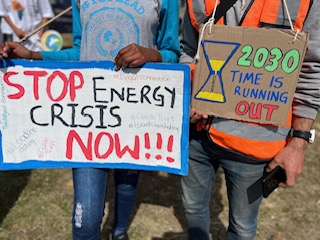 As the international climate-concerned activists, policy-makers, NGO’s, governments and civil society commemorated World Environmental Health Day 2022 on 26 September, Florida USA was bracing itself for Hurricane Ian, one of the worst to have hit the continent in recent recordable climate history. In July the Iberian peninsula (Portugal/Spain) mourned the loss of 1,700 due to an unprecedented heatwave, and in South Africa in April KwaZulu-Natal lost 486 lives with 80 people still missing in floods caused by an unusual cut-off low-pressure system that delivered extremely high rainfall levels of 450mm in some areas in around 48 hours.

“These are just a few of the disastrous weather conditions that have impacted hugely on the world over the past 6 months. And the really scary thing is, this is only going to get worse unless we dramatically change our actions,” says Anita Khanna, Climate justice activist, producer and CSL ZA co-director. “We need to hold governments and corporations accountable for their actions that fail to recognise the urgency of the situation.”

“We are very vulnerable in Africa to climate impacts and the social and economic fallouts from disasters. You’ve only got to look at the situation in KZN to see that there is little planning to protect lives or to assist people who have been affected. We need the climate crisis to be a daily topic of conversation in households, workplaces, schools and so on, to really up the ante on citizen engagement on the issue so that our collective voice can reach the corridors of power.”

“In order to do this, we believe we need to change the way we talk and communicate about the climate crisis. This is what we aim to do in this Climate Story Lab ZA,” says Khanna.

As The Guardian’s George Monbiot succinctly puts it in an article published 30 October 2021: “Most political news is nothing but court gossip: who’s in, who’s out, who said what to whom. It studiously avoids what lies beneath: the dark money, the corruption, the shift of power away from the democratic sphere, the gathering environmental collapse that makes a nonsense of its obsessions.” 1

“On Saturday 24 September, the March for System Change in Cape Town, highlighted the need for policy change. The turnout of especially young people, was a demonstration of the commitment ordinary citizens have to address the issue. Now we need to harness this power, tell these stories, in order to bring it to the attention of policy decision-makers”

The Lab will support up to 8 creative teams to develop their ideas that communicate how we can change behaviour to address the crisis and design a future in which all living organisms can thrive.

The CSLZA team is excited about submissions received from across the Southern African region, showing a diverse range of voices, needs, and urgency.

The programme will support creative projects in a residential lab, where participants will consult with story and impact experts, build networks and partnerships and forge connections with organisations working in climate change. Selected participants will be accommodated for the duration of the lab and all travel costs and meals will be covered by CSLZA.  Films (pitches/pre/post), animation, social media campaigns, XR/VR/AR, theatre, dance, stand-up comedy, poetry, children’s/teen/adult fiction writing, podcasts, visual art, performance art – any creative project that helps to communicate the urgency of the crisis,  aimed at any audiences – young and old alike –  are invited to submit.

This is a four day residential Lab near Cape Town South Africa, which is supported by the UMI Fund and hosted by the UCT Centre for Film and Media Studies in partnership with Doc Society and the Climate Story Unit.

Applications can be made online: https://climatestorylabza.org/application-form/ and close on 7th October at 5pm SAST.