Here are ten things to know to understand the food and nutrition situation in Zimbabwe. Please help the World Food Programme (WFP) raise awareness by sharing these facts on Twitter. 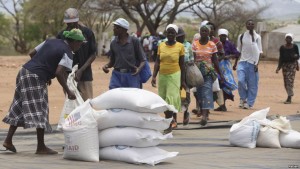 1) An estimated 1.5 million people – 16 percent of the population – are projected to be food insecure at the peak of the 2015-16 lean season, the period following harvest when food is especially scarce. This represents a 164 percent increase in food insecurity compared to the previous season.

2) Nearly 28 percent of children under age five in Zimbabwe are stunted, or have heights too low for their age, as a result of chronic malnutrition3) More than half (56 percent) of all children between the ages of 6 and 59 months suffer from anaemia

4) While the prevalence of HIV infection in Zimbabwe has declined over the past decade, it still affects 15 percent of the adult population, or some 1.3 million people. Zimbabwe also ranks among the 22 highest tuberculosis-burdened countries in the world.

5) Less than a quarter (17.3 percent) of Zimbabwean children between the ages of 6 and 23 months receive the recommended minimum acceptable diet for adequate nutrition.

7) In Zimbabwe, where drought is the most common climatic threat to agricultural production, only 7.6 percent of farmers practice conservation agriculture.

8) Zimbabwe is considered a low-income, food-deficit country, ranked 156 out of 187 developing countries on the Global Hunger Index, which measures progress and failure in the global fight against hunger.

9) The prevalence of food insecurity and absolute poverty are closely correlated. Poverty is most prevalent in rural areas, with 76 percent of rural households living on less than US$1.25 per day, compared to 38 percent in urban areas.

10) Zimbabwe has highly volatile food prices, which can increase by more than 30-40 percent in a season. Price instability, especially during the lean season, compromises households’ ability to access adequate food year-round through markets