Ngamo Peace club in Tsholotsho North, Ward 3 has utilised collaborative neutral platforms, commonly known as amalima or nhimbes to preach the message of peace in their communities. 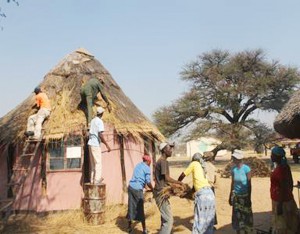 Part of the community members who took part in the activity.

Ngamo Peace club is one among many peace clubs formed by Heal Zimbabwe in local communities with the niche of promoting peace and community cohesion.
The Peace Club met on the 14th of August 2015 at Ngamo Primary School where theyÂ  helpedÂ  thatchÂ  one of the teachers houses.
The houseâ€™s thatch was old and leaking, which made it unsafe to reside in.The thatching of the house was informed by the need to create a safe and decent shelter since access to decent shelter is a human right that is enshrined in the constitution of Zimbabwe.
The nhimbe was attended by the School Headmaster Mr Mtenjwa Moyo, who commended Ngamo Peace club for taking ownership and responsibility by volunteering to assist in thatching the house.
â€œNgamo Peace club has brought a sense of oneness and togetherness in this community and we urge the Peace Club to continue its work because a developed community is a peaceful community, he said.
The nhimbe was also attended by two Village heads from the area who are also part of the Peace club. They both commended the work being done by Ngamo Peace Club which manages to bring people from diverse backgrounds to work towards community development and peace.
The community collaborative platform also served as an opportunity for community members to discuss issues that include the functions and roles of the National Peace and Reconciliation Commission (NPRC) and the role of traditional leaders in conflict mitigation and peace building. The discussions especially on the NPRC were educative and informative.
However, most community members were not aware of the existence of the NPRC. Mr Johnson Ncube, the Chairperson of Ngamo Peace club, pledged that the Peace club will carry out awareness campaigns on the NPRC in the area.