Emmerson Mnangagwa is either plain unlucky in politics or just not the one that Zanu (PF) supporters look up to as a leader. I am inclined towards the latter. 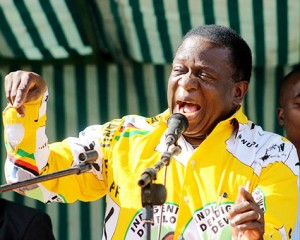 Eleven months ago, I wrote in this column that the man they call the Crocodile was an astute schemer but never managed to get good results for himself. That was in the period ahead of the Zanu (PF) congress that made him a vice president, technically replacing his long-time foe in the party, Joice Mujuru.
Mnangagwa played an active role in dislodging Mujuru and, for a moment, we thought he had finally succeeded in his schemes. Word quickly spread that, by making him VP, President Robert Mugabe had virtually anointed him his heir apparent. In fact, the Crocodile also believed the myth. I hope that he has abandoned that puffy optimism, because all things on the ground are arguing against it.
Almost all the allies he hobnobbed with in the battle against the Mujuru camp have abandoned him. Tellingly, the man at the so-called one centre of power that Mnangagwa helped draw in the sand at the December congress is clearly not impressed with the idea of the Crocodile succeeding him. That was evident in his bold public statement recently when he dismissed the myth that Mnangagwa was more senior to his colleague in the vice presidency, Phelekezela Mphoko.
That statement is ample evidence that Mugabe does not want Mnangagwa to succeed him, most probably because he doesnâ€™t trust him. I advise the VP to interpret Mugabeâ€™s statement as an insult. How could the Old Man equate Mnangagwa with Mphoko, an upstart and political non-entity who just happened to be there when Mugabe was surfing for a co-vice president to help his die-in-office plot?

Win or War
If you look at things closely, Mphoko can never, and must never, be considered Mnangagwaâ€™s equal. He was hardly known in Zanu (PF), and some say he didnâ€™t even hold a cell position in the party. So he didnâ€™t have anywhere near as much presence or following as Mnangagwa, a man who sacrificed his soul to ensure victory for Mugabe in 2008 when the party leader was sinking by devising one of the most infamous terror campaigns this country has ever seen.
That is when he adopted the June 27 Win or War! campaign that resulted in hundreds of deaths of opposition supporters. Thousands were beaten, burnt, raped and displaced. The Crocodile was Mugabeâ€™s chief election agent. He held the same position in the 2013 elections when Mugabe was handed the biggest â€œvictoryâ€ in all his long life.
Those are awesome achievements that Mphoko will take a century to score, so he canâ€™t be at the same level as Mnangagwa.
But Mugabe must be taking a cue from his feisty wife, Grace. She has evidently drifted away from Mnangagwa, who was just too glad to use her in his schemes against Mujuru last year. Grace has no respect for the Crocodile. That is why she basks in the reality that he takes notes from her, and is just too ready to share that humiliating fact with all and sundry. She is also not comfortable with him â€“ knowing that he was grovelling at her merely to ensure that his presidential ambitions materialise.

Rapport has gone
Late last year, we heard that she was working with Mnangagwa to ensure that Mugabe retired on his 91st birthday, but that rapport is gone now.
To make things worse for the Crocodile, the combative young wolves that hunted Mujuru in his pack have left him. Jonathan Moyo fired the first salvo when he used the public media to dispel the thinking that Mnangagwa was Mugabeâ€™s anointed successor. The former information ministerâ€™s sidekick, Saviour Kasukuwere, also does not see any worth in tagging along with Mnangagwa. The two are reportedly embroiled in a bitter under-the-table fight. The same applies to Oppah Muchinguri, who belonged to the close clique of anti-Mujuru schemers. She is not sharing coffee with the Crocodile.
What this means when all is said and done is that Mnangagwa is once again poised to fail in his presidential ambitions. His deck of cards is crumbling. The narrative is just too familiar. He failed in 2004 when he looked certain to land the VPâ€™s post after amassing the loyalty of six out of the 10 Zanu (PF) provincial chairpersons.
Earlier, he had failed in landing the post of national chair. Now he is a lame VP who is going nowhere fast.
– To comment on this article, please contact [email protected]