This belief that the dead are still here and manipulating events is an age-old African myth that continues to disempower us - to change their circumstances. 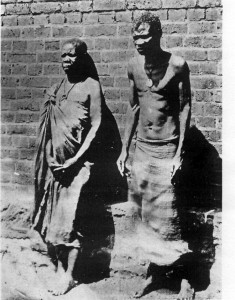 Quote: The United Nations has expressed confidence that the Governmentâ€™s new economic plan, the Zimbabwe Agenda for Sustainable Socio-Economic Transformation (Zim Asset) will lay the foundation for a strong sustainable economic comeback if implemented. UN resident co-ordinator Alain Noudehou said they expected Zim Asset to turn around the countryâ€™s economic fortunes, which are still being affected by the legacy effects of a sanctions-included decade of decline leading up to February 2009.
â€œWe trust that through the Zim Asset, Government will put in place policies and programmes to strengthen the economy for the benefit of all Zimbabweans,â€ Noudehou told stakeholders during the annual review of the Zimbabwe United Nations Development Assistance Framework (Zundaf) in Harare last week.

Lot of bull
During its lifespan, Zim Asset is expected to result in an average 7, 3% rate of economic growth. The highest growth rate of 9, 9% will be achieved in 2018, the last year of implementation. The economy is forecast to grow by 3,4% this year and by 6, 4% in 2014: End quote
This was reported in the state media in December 2013, what a lot of bull. Clearly the UN had it all wrong here and this continues to worry me that the international community clearly has no clue on the challenges we are facing in Zimbabwe. Maybe they are just choosing to be nice and say what is politically correct which doesnâ€™t help us at all. In fact statements such as the one above entrench a regime that has not only dismally failed but has no clue how to get out of the rut.
I have just about had it now. President Mugabe has been joined by Jonathan Moyo and both are now waiting for Mbuya Nehandaâ€™s skull before we can expect any economic rebound. So once again itâ€™s the British who are causing the untold suffering of millions of jobless Zimbabweans.
How Moyo comes into the fray bamboozles me since he has been redeployed to the education portfolio and has little appreciation of economics. But all the same, we have serious problems when a President who told us to be patient and that an economic rebound was around the corner now, is joined by a whole Professor to tell us that we need a miracle. I guess that is an admission of total failure when one has to call on dead spirits to help the living.
Thatâ€™s the problem with Africans. This belief that the dead are still here and manipulating events is an age-old African myth that continues to disempower us. Failure is taken as a show of anger from the spirits. What a load of nonsense.
Whatever happened to the Chinese and Russians deals that caught headlines in the state media as the solutions to our economic problems?
As I have said before, we are wasting our time waiting for these gentlemen to come up with any solution as long and they hold onto power. We certainly need divine intervention but we must not fold our arms and wait. We need to agitate for collective action now.
Clearly, there are going to be more job losses and the liquidity crunch is getting worse. There will be no respite until we get direct budgetary support from the West and that will not happen in the current circumstances. Even if we received such support, there will be a long delay on its impact and it will not necessarily result in industrial recovery.

Revive agriculture
The only sustainable solution is industrial re-investment and the revival of agriculture. That would take about a year or two to get things going but only after a land audit is done and farmers dispossessed of land assets are compensated and we have attracted investment funds back into agriculture. That will not happen with Mugabe around. So itâ€™s a long shot. Economic recovery is not coming soon.
We could wait for 2018 and hope that we can vote in a new government which means we are looking at about 2020 for this economy to start showing signs of life- exactly 5 years from now. Again thatâ€™s just too long to wait for a job for the millions who are unemployed.
The politicians are busy bargaining and waiting for 2018 and so expect no action from there before 2018. Our hope is action from civic groups and organised groups such as vendors who can decide that enough is enough now. As mass unemployment increases this is a very likely scenario. In my opinion that could be the only critical juncture for change as happened in Tunisia.
Clearly Mugabe and company have lost the plot and it is shocking who and what they will blame for their failure. Itâ€™s like a real comedy where the clowns are getting more creative each day.
The only way out of this mess is change of government. Everything else is really academic. – Vince Musewe is an economist and author based in Harare. You can contact him at [email protected]