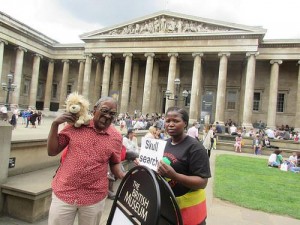 From his lowly perch as just one of the education ministers, Moyo is reduced to tweeting that the Zanu PF government canâ€™t concentrate on turning around the economy before the repatriation of the remains of First Chimurenga heroes from foreign museums (see: http://www.zimbabwesituation.com/news/zimsit-m-nehandas-skull-first-before-economy-newsday-zimbabwe/).

The British government last year invited Zimbabwe to send experts for discussions in London on the return of any Zimbabwean human remains held in British museums. But historians say it is highly unlikely these include the skulls of any 19th century Zimbabwean freedom fighters (see UK Times story on our campaigns page: http://www.zimvigil.co.uk/vigil-news/campaign-news/710-mugabe-demands-return-of-freedom-fighters-skulls).

So it could be a long search â€“ which means, according to Moyo, farewell to any hopes of the economy receiving any attention for some time, though he did promise that when the government does finally get around to the matter the economy would bounce back â€˜big time on the back of the irreversible indigenisation and empowerment bedrockâ€™. The Vigil canâ€™t wait. We would love to bounce back home.

Moyoâ€™s egregious remarks followed Mugabeâ€™s usual crazy bluster at Zanu PFâ€™s Heroesâ€™ Day rally in Harare at which he accused Britain of displaying the beheaded skulls in a â€˜history museumâ€™.

Mugabe went on to extol the achievements of ZimAsset, which he maintained was â€˜certainly yielding fruitsâ€™. He didnâ€™t mention the 2.2 million jobs he is producing since the last elections, but said the government was delivering 313,368 urban housing units and serviced stands by December 2018 . . . (see: http://www.newsdzezimbabwe.co.uk/2015/08/as-foreign-investment-dries-up-mugabe.html).

The Vigil advises prospective foreign investors to examine closely what they are dealing with. They might note the outcome of the long negotiations with the Indian conglomerate Essar to revive Zisco Steel. A month ago industry minister Mike Bimha insisted that the troubled $750 million deal was going ahead. Now he has admitted it is dead (see: http://www.thezimbabwean.co/2015/08/bimha-makes-u-turn-on-zisco/). Perhaps the government could ask Essar to build313,368 urban housing units instead.

The Vigil managed to capture pictures of Mugabe visiting the British Museum in search of skulls. He was accompanied by his pet lion Rhodes perching on his shoulder. The museum said it didnâ€™t have the skulls he was looking for but it would no doubt welcome his own as soon as possible for display in the dinosaur room. For our part, we urge Zanu PF to expand its search for skulls to include the 20,000 victims of Gukurahundi still haunting us today. And by the way where is Itai Dzamara?