The alarming spread of lawlessness in cities and towns is a cause for concern and the restoration of law and order should be a top priority for government, say social activists. 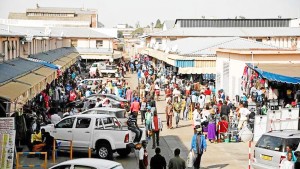 Drug pushers trade dangerous drugs quite openly on the streets of the capital city, with no fear of being apprehended by the police.

Robberies, abductions and hold-ups have become common place. For fear of chain-snatchers, women have stopped wearing jewellery when shopping in the crowded bazaars. The spurt of petty crimes in recent months has overwhelmed the police, and the publicâ€™s faith in the ability of the police to maintain law and order is at an all-time low. The spiralling crime graph is causing concern, and citizens groups have drawn the attention of the authorities to the link between growing street violence and the increasing problem of drug addiction.
With jobs hard to come by, there are tens of thousands of unemployed people, and some of them have been sucked into the world of narcotics either as users or pushers. A college student, who was recently nabbed by passers-by when he tried pickpocketing a phone from a housewife in the heart of Dzivarasekwa, told the police he needed the money to support his expensive drug habit.

Huge problem
Even government authorities concede that drug addiction is a huge problem. â€œDrug addicts are destroying peace in families, shaking stability and the social fabric itself,â€ acknowledged a police officer, who spoke on condition of anonymity.
According to public records, growing lawlessness in urban areas is directly linked to the easy availability of drugs. Pushers trade dangerous drugs quite openly on the streets of the capital city, with no fear of being apprehended by the police. In the 1980s few people were familiar with words like heroin, bronco and marijuana. But large numbers of people, cutting across all social classes, from businessmen to taxi-drivers and students have become drug addicts, under peer pressure or the strain of living in the cities.
While the exact number of addicts is not known, unofficially they are estimated to be between a million and 1.2 million strong countrywide.

Hooked on bronco
Counsellors are alarmed that 70 percent of them are between 16 and 35 years. University campuses have always been a favourite of drug pushers, and though for a long time most addicts were male students, an increasing number are female â€” much to the concern of parents and experts.
A lot of the students are hooked on bronco, a chemical which was put on the list of banned drugs, but which is smuggled in from neighbouring Botswana.
According to Norman Jesinawo of MunharaundaÂ  Edutainment Trust, the number of people addicted toÂ  bronco and prescription pills has grown seven-fold over the last five years, and the quantity of broncoÂ  seized in recent times has increased. The Trust runs a youth-based programme that conducts drug abuse campaigns in schools.
Drug detoxing centres across the country are increasingly finding out that many of their patients are also infected with the dreaded HIV virus that leads to the fatal AIDS.Â  A doctor working at a treatment centre in Harare pointed out that the disease was being spread to sex workers by drug addicts.
“Research done by the Anti-drug Abuse Association of Zimbabwe revealed that 50 percent of injecting drug users who were tested for HIV were found to be positive.Â  The challenge here is passing HIV risk reduction messages to drug and alcohol addicts as well as advising those who test positive to seek help,” Jesinawo says.

Elevated risk
These youths are at an elevated risk of contracting HIV for various reasons. Chief among these is unsafe sex with multiple partners â€“ a combination of indifference to safer sex practices and the demands of commercial sex work, which many addicts turn to in order to support their drug habit. While the HIV prevalence rate is 15 percent according to the National Aids Council (NAC), it is feared this may be higher where addicts are concerned. Benny Tawonezvi, who was able to quit using drugs six years ago, confirms that it is difficult to get this group to listen and take action to protect themselves. “I am a recovering addict who was hooked on drugs for 22 years. I know that addicts are stubborn and in my case when I was approached with risk-reducing messages, I was stubborn. Addicts will resist help and it requires patience and time to get through to them,” he said.
A study done by the Anti-drug Addiction Association of Zimbabwe reveals that drug users typically share syringes, greatly increasing the risk that HIV is passed between them. Worse, few drug users seem aware that shared needles can expose them to HIV.

Prohibitive cost
Addiction treatment centres are few and far between and their cost is prohibitive. Currently, treatment costs range from $20 to $40 a day, well beyond the means of most of those who need care. The high cost of treatment means many of those who require help are not able to access it and remain in the streets hooked on drugs and alcohol. Investigations revealed that treatment centres do carry out HIV testing, but have to refer clients to a government facility for treatment.
For this reason, says Caroline Pfende, a counsellor at the MET, case management and tracking of clients presents a challenge. “One is never sure that they will continue attending the care service clinic. And if they do not stop abusing drugs then it becomes futile because they are bound to drink excessively and engage in risky behaviour.Â  For one to begin recovery they need to accept they have a problem and this is often the challenge,” says Pfende.