Prison officer Mathias Kadiki has been guarding Roderick Chambwe* for the past three weeks at Karoi hospital side ward. 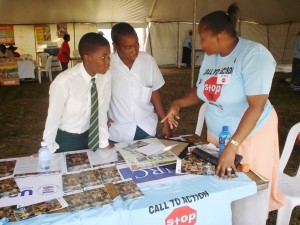 Chambwe, a convicted criminal is serving part of his sentence at the local prison. He is on tuberculosis medication, but the two are now sharing a tiny side ward at the hospital, where the prisoner lies on the bed as he coughs.
â€œI am exposed to contact TB athough I am assigned to night-duty with some patients suffering from TB. No one is concerned about our welfare and our plight as workers,â€™â€™ said Kadiki in an interview punctured with deep hard coughs from Chambwe.
Kadiki is not protected against TB that can be spread through the air. The writer had sneaked into the hospital room during lunch hour.
A SafAids media manual on TB and HIV says, â€œTB transmission occurs indoors. An individual risk of exposure is determined by the concentration in contaminated air and length of time a person breathes that air. The risk is high when one has had close and prolonged indoor exposure with the affected person suffering from TB as it will affect approximately 10 and 15 people per yearâ€™.â€™
Prison sources at Hurungwe prison, situated about 50 kilometers south of Karoi, say one officer had to apply for transfer on medical grounds early this year.
â€œOur prison cells are in a deplorable state as we are using former farm tobacco barns as cells. We are using former farm workersâ€™ houses as accommodation. It is pathetic here for both prisoners and the officers,â€™â€™ said an officer who cannot be named for professional reasons.
The government took over the farm in 2003 during the height of land reform but it has not been rehabilitated for prison officers.

2 Billion infected
Approximately 2 billion (one-third of the world population) are infected with Mycobacterium tuberculosis, the cause of TB. It is the cause of death in one person out of every three who dies of HIV-AIDS worldwide.
Doctor Mkholeli Ngwenya, from the Ministry of Healthâ€˜s TB and Aids Unit, admitted that even health workers were at risk of being infected during the discharge of their duties in assisting TB patients.
â€œThere is a dire need for advocacy and assistance to health workers who are fighting to combat the spread of TB and Aids. Care-givers are dying in silence. They are vulnerable,â€™â€™ he said.
Ngwenya explained that the health ministry was working with other Ministries, including defence, and the police in an effort to educate them about the link between TB and Aids as a health issue. â€œWe are working together on TB at various workplaces to lobby for policy shift by the authorities. Generally prisons are overcrowded with poor ventilation and lack of sunlight,â€™â€™ he said.
His words of assurance are what the prison officer and many others in his predicament have been waiting for for too long. Hope is renewed as Kadiki says, â€œevery worker has a right to shelter and food among other basics.â€
For Zimbabwe, which is ranked 17th among 22 high burden countries on TB worldwide, there is great need for a policy shift as this is a major public health issue, with an estimated incidence rate of 539 cases per 100 000 people according to the World Health Organisation Global Tuberculosisâ€™s report of 2009.
As the battle to combat TB continues, officer Kadiki says, â€œ I hope it will be soon that workers in government and other stakeholders address our health plight.â€
For Kadiki and many others like him, only time will tell.
*Not his real name