Given the excitement that accompanied the recent visit to Zimbabwe by Aliko Dangote, one could be forgiven for thinking that he is mega-buck Chinese investor. 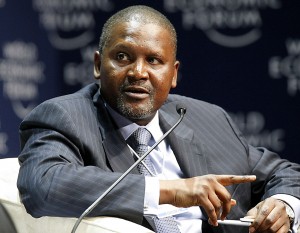 But, no, he is a Nigerian billionaire and Africaâ€™s richest man, according to a Forbes survey. President Robert Mugabe and a host of his ministers were on their toes once Dangote landed at Harare International Airport.

The red carpet reception and fawning attention the businessman received is usually reserved for Chinese visitors whom the embattled Zanu (PF) government regards as all-weather friends. It has been like that since the early 2000s when the Mugabe regime began to suffer increasing isolation from the west over human rights abuses and poor governance. It is called the Look East policy. We didnâ€™t see anything like that when the late Muammar Gaddafi came to Zimbabwe many years ago – and he was promising to drown this country in oil.

Asian Tigers
Zanu (PF)â€™s imagination is always fertile when it comes to possible economic messiahs.Â  When the Look East policy was adopted, the red carpets were flapping for not only the Chinese, but also the Malaysians and the Singaporeans. We were told that these Asian tigers would make big things happen for Zimbabwe, in the absence of the northerners.

Malaysia and Singapore soon faded out and the Chinese presence is mostly limited to promises of mega-deals that never arrive. Despite that, there is a lot of mega-phone noise whenever the Chinese come here or the president kowtows a begging delegation to Beijing.

But Dangoteâ€™s visit has introduced a new dimension. His presence in Zimbabwe has almost surpassed the zeal that is normally given to the Chinese. It looks as though Mugabe and his clueless band of ministers are increasingly getting disillusioned with the Chinese and would therefore do anything to look for Chinaâ€™s replacement as an all-weather friend.

Clearly, there is a lot of desperation on the part of the Zanu (PF) government, which has dismally failed to rig the economy since the disputed 2013 elections. Not long ago, Mugabe called Nigerians crooks, all of them. He showed an undiplomatic anger and impatience with the west African nation and its citizens. It is difficult to explain his attitude, but it seems he has a beef with Nigeriaâ€™s leaders, to the extent of thinking of all Nigerians as criminals and cheats. It is therefore surprising when, all of sudden, he sees a saviour in Dangote.

Instead of worrying that the Nigerian mogul would come and steal our resources and money, he is regarding Dangote with a contrasting lens. Cabinet had to sit in a hurry to deliberate on the investment promises the Nigerian businessman made. Mugabe couldnâ€™t wait to shake hands with Dangote – who we were made to believe is the best thing ever to have happened to us. It seemed as though the investor would pour all the $17.5 billion he is said to be worth into this country.

Either the Zimbabwe government is desperate to attract the rare high value investor or Mugabe is playing a political game using Dangote. Both seem highly likely. Who doesnâ€™t know that this country is so starved of investment? Any amount of money would do just just fine for a government that is struggling to pay its employees every month.

On the political side, the government seems anxious to send a message to the outside world that investment has started pouring in. It is even better if that investment is coming from a Nigerian. That would spite the Nigerian leaders who have refused to toe Mugabeâ€™s line. In addition, Dangote is handy in massaging his lofty pan-African rhetoric. If the deal takes off – he will climb to the top of the hill and shout that Africans are investing in Zimbabwe, so the British and Americans can take their filthy money elsewhere.

It remains to be seen, though, if the government will set aside its indigenisation law and allow Dangote to own as many shares in the promised deals as possible. No-one has so far explained that to us – and I donâ€™t see the Nigerian â€œcrookâ€ settling for 49 percent. – To comment on this article, please contact [email protected]