This week the Vigilâ€™s sister organization Restoration of Human Rights in Zimbabwe took to the streets of Harare and Bulawayo. They staged a demonstration in the capital against the Mugabe regime and joined in a protest march in Bulawayo against pre-paid water meters which it is argued will worsen the situation of the poor. 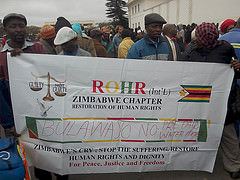 Here is an account of what happened drawn from messages on Whatâ€™s App.

Â· 14.30 from Harare: â€˜Police refused permission to march for no apparent reasonâ€™ (for demo planned for 2nd).

Â· 12.45 from Harare: â€˜To all our brave cadres today thank you for defying the regimeâ€™.

Â· 12.47: â€˜Lest some may think it was a stroll in the park â€“ no â€¦ the police were armed to the teeth at our proposed starting and ending points. Like the wise man from the East we changed routes.â€™

Â· Other messages of congratulation come in.

Â· 17.36 from Harare: â€˜Thanks for your encouragement. The battle line is set. No turning back now.â€™

Â· 13.27 picture identifying Stanley Square with a message â€˜I was asked to give a solidarity speech on behalf of ROHR Zimbabwe International, and good people I nailed it before an estimated 3,000 at Stanley Square.â€™

Â· 18.35: Ephraim Tapa: â€˜Congratulations guys. We can continue to go from strength to strength. And yes, together we can.â€™

Â· 20.07 from Bulawayo: â€˜Good people I wish you were all in Bulawayo today. We had a wonderful day and now people know about ROHR and we had our flyers and everyone wanted to be part of us. We thank God for this day coz it was the birth of ROHR in Bulawayo.â€™

Â· 08.49 from Bulawayo: â€˜Bulawayo has set a precedent. An estimated crowd of 3000 took to the streets demonstrating against the proposed installation of pre-paid water meters. Like a true giant ROHRâ€™s banners led the procession from Town House to Stanley Square where speeches were deliveredâ€™.

Vigil co-ordinator Fungayi Mabhunu said heâ€™d received a message from Harare about the demo there. It said people were very supportive. They identified with demands for human rights.

Â· Ephraim Tapa said he had advised ROHR in Harare that it was their constitutional right to demonstrate regardless of what the police said. Ephraim, who was speaking at the Zimbabwe Action Forum (ZAF) held after the Vigil, disclosed he had just made an undercover visit to Zimbabwe. He said plans were underway for demonstrations in other areas. â€˜Very soon you will see a lot of things happening in Zimbabwe at our instigationâ€™, he said. â€˜People are looking to us in the diaspora to take the lead.â€™ Ephraim said he had seen at first hand that Zimbabweâ€™s economy was grinding to a halt. The opposition was quiet and the voice of civil society muted. The talk was of â€˜dead hopeâ€™. The only thriving business was the charismatic church.

Â· ZAF also discussed plans for a demonstration on Tuesday 22nd September against the visit to London by a Zanu PF delegation trying to drum up money. The delegation includes three ministers: Mike Bimha, S K Moyo and Obert Mpofu. There was overwhelming support at the meeting for a protest against the visit by representatives of an illegitimate regime trying to tell the world that all is well in Zimbabwe.

Â· Thanks to Humphrey Dube, Similenkosi Matiwaza, Edson Mulero and Thulani Chagwiza for arriving early to help set up. Thanks to Thulani, Humphrey and Caroline Witts for looking after the front table. Special thanks to Patricia Masamba for mending and washing our long cloth banners: â€˜End murder, rape and torture in Zimbabweâ€™ and â€˜No to Mugabe, No to Starvationâ€™. Thanks also to Tinashe Chapata for his help at the end of the Vigil.