Government will this year distribute $28 million worth of agricultural inputs to party-card-wielding farmers. 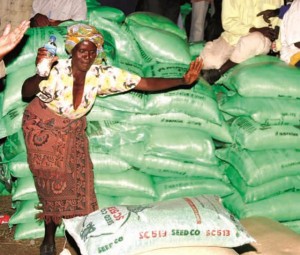 That is the Zanu (PF) way â€“ slogan for seed pack. Approximately 300,000 smallholder farmers are expected to stand in line to receive fertiliser and seed which, though funded from taxpayersâ€™ money, are widely touted as the â€˜presidential assistance scheme.â€™

In 2000, Robert Mugabe dispossessed the countryâ€™s 4 000 commercial farmers of their land before distributing it among his fist-shaking thugs. The violent land grabs resembled a hyena attack in which ruling party bigwigs made off with the hindquarters and forelimbs of the carcass, while the war veterans â€“ the scavengers who feed after the apex predators have had their fill â€“ fought over the scraps.

Nobody can deny the disparity of land distribution that existed post-independence. But the big question is why Mugabe waited all of two decades â€“ five terms in office â€“ to address land imbalances.

Before 2000, government administered numerous unoccupied farms â€“ referred to as state land, Crown land for those who know the words to â€˜God save the Queen.â€™ If Mugabe was at all concerned about shortage of land amongst the black majority, he would have first resettled people on those vacant farms. Thereafter, government could have targeted underutilised farms.

Agricultural empire destroyed
To take land away from farmers who were the most productive in Africa was, to say the least, stupid. According to the parable of the talents, the master is supposed to reward the productive workers, not the other way around. â€˜He who had received the five talents went at once and traded with them and he made five talents more….â€™

What is the point of all those costly trips to the Vatican, if none of that is ever applied in real life? In 2006, the syndicated lenders of Kondozi Estate were owed Z$37 billion dollars (US$237 million, assuming official exchange rate of Z$156: US$1). Kondoziâ€™s assets included 63 tractors, 36 motorbikes, 6 Nissan diesel UD90 trucks, and several T35 lorries. Randomly pick 50 of our new farmers. Chances are you wonâ€™t find even one tractor in their midst. Agriculture is not a Mickey Mouse business.

Since Mugabeâ€™s fast-track land reform, farmers have required perennial assistance. And annually the new farmers have failed to produce sufficient grain to feed the nation. It is hard to justify governmentâ€™s annual splurge on agricultural inputs, especially after President Mugabe himself admits the new farmers are incapable of producing anything.

â€˜A2 farmers have been giving us problems and we have discovered that quite many of their farms are idle. We want to carry out an audit on A2 farms because some people are having farms for status. They tend to say that I have a farm; I am a farmer. But the question is what are you doing on those farms?â€™ â€“ The Presidentâ€™s own words.

Minions admit failure
Mugabeâ€™s minions also admit to the failure of the land â€œreform programmeâ€. Manicaland Provincial Affairs Minister, Mandi Chimene lashed out at absentee farmers, who regard farming as a part-time vocation.

â€˜Cell phone farmers are worse because they are a threat to the nation and they can bring disaster among us. It is not everyone who got the farms and we cannot all be farmers. But those that got farms are failing to utilise them. Those that got the farms were very lucky, but why are we failing to produce anything from those farms?â€™ Chimene said.

Reserve Bank of Zimbabwe governor, John Mangudya, echoed these sentiments, stating â€˜We should take farming as a real industry because farming forms the backbone of our economy.â€™

Zimbabwe Farmers Union executive director, Paul Zachariah gives an even grimmer diagnosis. â€˜If we are to talk of serious agriculture in this country, we still have a long way to go. The private sector and government should own up to their mandatory and complementary roles if we are talking of total revival of agriculture.â€™

It is hard to disagree with Zachariah. The government has failed in its support role. Governmentâ€™s land inspectors from Agritex and the ministry of lands who, pre-2000, had a large fleet of motor cars and motorcycles, do not have one bicycle between them and, as such, no inspections are carried out.

Where is Agribank?
Where is Agribank?Â  Ironically, it was on the eve of Mugabeâ€™s land â€œreformâ€, in 1999, after the institution changed its name from Agricultural Finance Corporation, that it ceased to be relevant. In the absence of title deeds the banking sector sensibly keeps away from the farming sector. The result is that GMBâ€™s silos hold nothing but air â€“ 700,000 metric tonnes of maize to be imported in 2015, in 2014 we imported 150,000 metric tonnes from South Africa and 213,400 tonnes imported in 2013.

The indigenous people of Zimbabwe have been farming for centuries. But land was regarded as home, hence the word â€˜kumusha.â€™ In contrast to the traditional â€˜homeâ€™ concept, commercial farms are business first, home second. As a country, we have this incorrect notion that farming is what one does after retirement or dismissal from work.

Many of the new farmers seem to have difficulty getting past that idea of â€˜kumushaâ€™ where, after you have produced sufficient quantities for your own consumption, you pick up a knobkerrie, wander into the bushes with the hounds in tow and pursue hares all day. Winter irrigation for what?

Review the model
It is the nature of humans to waste anything that comes for free. â€˜Weâ€™ll always get more free seed next year.â€™ In the old days when farmers borrowed from the AFC, they slogged to meet the loan repayments. You donâ€™t slacken when you know your new tractor can be repossessed by the bank.

If Mugabeâ€™s farmers habitually produce nothing, perhaps it is time to review the assistance model. In Uganda a Canadian NGO donates two goats per underprivileged family. When the goats produce the first three kids, they are then given to the NGO which further donates them to another needy family. Milk and meat from the growing flock feeds the recipients. In the long run, the project becomes self- sustaining.

Instead of continuous handouts, like Mosesâ€™ manna and quail â€“ free fertiliser, mahala seed, and complimentary education to the children of war vets â€“ this is the sort of innovation to which we should aspire. Government could even replicate the Uganda goat project using organic chickens or piggeries.

There is only one reason Mugabe continues to throw pearls to swine: to buy support. To get free fertiliser you must produce your party card. Mugabe wants to appear like a messiah, bringing aid to those in need. But a donor is not a true rescuer if it is he who created the poverty in the first place. If you set an apartment block on fire, you donâ€™t get a medal for pulling people out of the burning building. – Till next week, my pen is capped. JerÃ  Twitter @JeraZW