The City of Harare is evidently failing to supply its residents with a satisfactory delivery of 'clean' water, and to make matters worse it hasn't been taking the maintenance of pipes seriously. 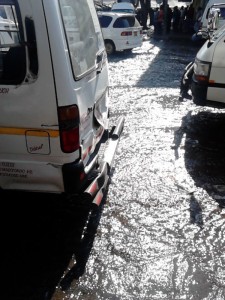 On Wednesday this week I saw a pipe violently vomiting the precious liquid at Copacabana, along Chinhoyi Street. This happened again yesterday, in Robert Mugabe Road and today between Speke and Kaguvi Street. In now looks like the City is going to continue losing many megalitres of water per day, yet some suburbs our thirst is yet to be quenched.

Wasting water in these huge amounts all over Harare will mean that our mothers and fathers will have to cross those streets in the same way they used to when they were going to their respective rural schools in their yesteryears. But these stones will obviously not treat everyone in the same equal way. Apart from not being high-heel friendly, some will just trip and fall and end up having the worst of days. As if that is not enough, some motorists will also find it fun to splash water onto the unsuspecting pedestrians. If one is wearing a white attire, the results will be very catastrophic.

This is all happening against the background that officials from the German city of Munich have been advising Harare City fathers to embrace new efficient technologies so as to promote proper service delivery and revenue collection. This just shows that the use of 20th century infrastructure in the 21st century is not acceptable at all.