One of our readers asked whether the behavior of public hospitals, as reported by several news sources, of detaining new mothers who have failed to pay their maternity fees is legal. 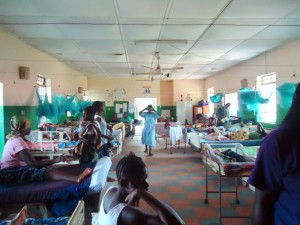 The short answer is this:
1. A hospital does not have the authority at law to restrict the personal liberty of a new mother for non-payment of maternity fees. For this reason, the detention of a new mother in a hospital for failing to pay maternity fees is illegal. Such detention is called false imprisonment and the new mother is entitled to damages from the hospital for such unlawful detention.
2. The new motherâ€™s detention is also a violation of her constitutional rights, particularly the right to health, and the right to liberty and freedom from arbitrary detention.
3. The refusal to give the mother her childâ€™s birth record is also a violation of the childâ€™s right to an identity and citizenship.

What is false imprisonment?
It occurs when a person takes away the personal liberty of another person without good cause. The law calls this unjustifiable infliction of restraint upon the personal liberty of another. False imprisonment is usually raised in cases against the state when individuals are illegally arrested and detained by members of the police or other uniformed force. It can also be raised against an individual who or an institution which commits this act.

Lawful Justification
There seems to be no basis on which hospitals can claim to have detained any woman for failing to pay maternity fees. It appears that the only reason why women are detained is to force them to pay the hospital fee before they leave. Maternity fees are a civil debt, in other words it is not a crime to owe maternity fees. One should not be arrested or detained for owing maternity fees. Rather, the person who is owed the maternity fees can claim the outstanding amount through the civil court system. If they get a favorable decision from the court, they can attach property to cover the debt.

Some people suggest that hospitals have the right to keep women until they pay as a lien. A lien is a legal right given to one person, to keep the property of another person which they already possess if the other person owes them money spent or for work done for them.

For example, if Tom is a builder and he builds a house for Mary, if Tom has Maryâ€™s car, Tom can hold on to Maryâ€™s car as a lien for the payment of the work he did until Mary has paid him for the building. Tom can say to Mary, I am not giving you back your car. I am holding it in lieu of the payment for building your house. This is legal.

However, a lien only relates to things not beings. Hospitals cannot hold on to people to pay for a service. Human beings cannot be valued to be traded in exchange for goods or services given; that is human trafficking or pledging-both are criminal offences under Zimbabwean law.Â  The right given to a lien holder is the right to retain/keep property, not a human being. – This article first appeared on the The Law Hub