Raise awareness and promote dialogue on the subject 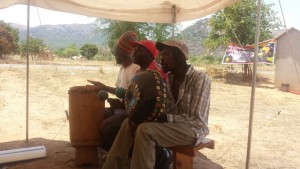 Since time immemorial the Shona people used to conduct ceremonies known as the Bira. The Bira an all-night ritual, in which community members call on ancestral spirits for guidance and intercession, was also believed to be used for promoting peace, community cohesion and even calling for rainmaking. The attendees at a ceremony participate in singing, dancing and hand clapping, twoÂ mbiraÂ players are joined by a player on a pair of gourd shakers (hosho), which emphasize the underlying triplet beat. This was a way of getting the people together, the youth, women, men, children, the whole community participated in a neutral and non-politically charged atmosphere.

Faced with escalating cases of gender violence in its many different forms in Mashonaland Central Province, Institute for Young Women Development deliberately adopted the concept of a traditional bira to mobilise and commemorate this yearâ€™s 16Days of Activism against Gender Based Violence. The concept also worked well to provide the rural communities of Bindura to reflect on IYWDâ€™s interventions to promote peace while confronting the different forms of violence that inhibits young womenâ€™s participation in public spaces such as providing leadership in the communities, speaking out against injustices and reclaiming their stake in decision making. As such IYWD hosted a Bira in Chiveso, Bindura on 4 December which saw young women and men, women and men in general, chiefs, village heads, and local councillors participating and engaged in lively debates on gender violence and young women participation.

During the dialogue no stone was left unturned as people openly engaged with their traditional Chiefs, headmen and Village Heads present. Issues of participation of young women in traditional courts, decision making and political processes sparked debate. Young women represented by Onai Chitakunye and Faith Matare challenged the traditional leaders on issues of violence against women and questioned the lack of women in traditional courts. â€œIf a female victim of violence goes to the male dominated traditional court its hard for them to show the men some of the scars or the extent to which their perpetrators hurt them. Furthermore, they are prejudged and questioned on â€˜what they should have doneâ€™ to be violated. This is why we need females to be part of the chiefs courts so that we can feel comfortable in confiding and respond positively to women specific cases,â€ said Onai.

Young women demanded space on the political table by echoing how participating in traditional courts can help deal with issues affecting them such as child marriages, politically motivated violence against women and poor social service delivery among others. 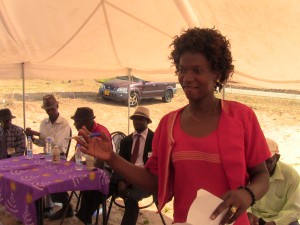 Councillor Alderman Zvarimwa who has been councillor for Ward 13, Chiveso for 35 years since Zimbabwe attained independence in 1980 challenged the young women and responded by saying â€œ2018 I am stepping down, Ward 13 is all yours ladies, but I am a bit worried because Headman Chiveso who is also an IYWD honorary member asked if he could have a secretary, a young woman who will represent the other young women, and take notes for him but no one amongst you applied. I am the one who spoke on his behalf recently when we had our village meeting. I donâ€™t know why you are not applying?â€ Young women from Chiveso cited various reasons and one young woman said some of their husbands had disapproved hence they didnâ€™t apply. The young women encouraged IYWD to also reach out to their male counterparts.

Meanwhile, Chief Musana thanked IYWD for bringing the community together through the Bira and to him it was an eye-opener that young women still acknowledged traditional practices aimed at fostering community cohesion. â€œThank you for this platform now I know that young women are aware of our positive traditional practices and it is encouraging. I had not considered having a young woman in the traditional courts since the roles and responsibilities can be straining for a woman, for example the chiefs police have to travel several kilometresâ€™â€™. His statements led to a serious debate as young women clarified how they are also able to do the job, â€œWe have female police officers and females in the army, so I believe as women we can also do it,â€ said Sekesai Sande a young woman from Foothills Farm, Matepatepa.

Soon after the dialogue, Chiveso became live as mbira, gourd shakers (hosho) and drums were being played whilst people sung and danced. The lunch was a delicacy of traditional dishes including finger millet pap (sadza rezviyo) vegetables with peanut butter (muriwo une dovi), goat meat and roadrunner chicken (huku yechibhoi).

The traditional gala, provided a symbolism of peace and unity in the community which IYWD intends to build on in entrenching a culture of peace, tolerance and challenging dominant ideologies that continue to oppress young women and inhibit young womenâ€™s participation.