Ask someone about the effects of Zimbabwe's highly controversial land reform programme and you will hear words like violence, economic collapse, hyperinflation, and poverty. The socio-economic impacts of land reform have been well studied and publicised. But you probably won't hear much about wildlife. 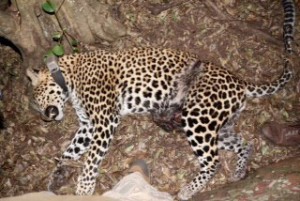 Before 2000 wildlife in Zimbabwe was thriving, in part due to the role played by private landowners such as commercial farmers. Private land was home to important populations of endangered species, including 80% of Zimbabwe’s cheetahs. Zimbabwe was held up as a model for how land can be effectively managed for the benefit of both animals and people, and other countries soon adopted their policies and replicated their success.

But in 2000, the fast-track land reform programme was initiated, resulting in the haphazard resettlement of huge numbers of people onto of enormous areas of private land. The impacts of this process on people made the international headlines, but until now no one had systematically studied the how this could have effected the status of wildlife populations, or on human-wildlife conflict.

My colleagues and I set out to change this. We conducted spoor (footprint) surveys across over a thousand kilometres of transects on three land use types: private land; resettlement land (former private land that had now been resettled); and communal land. The spoor records allowed us to estimate the abundance of wild animals in each area. We also conducted hundreds interviews to assess the level of human-wildlife conflict. See https://peerj.com/articles/1537 and http://etheses.dur.ac.uk/3410/ for details.

Surprisingly, we recorded almost no signs of wildlife outside of private land. Although wildlife would have previously been abundant on the land that had now been resettled, most species were now conspicuously absent in resettlement and communal areas. Where, a few years ago, we would have found thousands of spoor, we instead found a landscape denuded of its fauna.

We focussed our analysis on large carnivores as they are important keystone and flagship species, and we found that their spoor density was on average 98% lower on resettlement land than on private land. When we extrapolate this to a national scale, our tentative findings suggest that the land reform programme has resulted in declines in the number of large carnivores of up to 70% across the entire country. Worryingly, we also found that merely being close to a resettlement areas was sufficient to cause declines in wildlife abundance on private land.

So what is causing this decline? The main driver appears to be industrial levels of poaching. Another team of researchers found, for example, that over a period of 8 years in SavÃ© Valley Conservancy near Chiredzi, 4,148 poachers were captured, 84,396 snares were removed, 2,126 poaching dogs destroyed, and the remains of 6,454 animals were recovered, including lion, cheetah and African wild dog. Poaching was conducted mainly to sell bushmeat in nearby communal lands. Habitat loss and fragmentation due to clearing of resettled land for agriculture is also probably another important factor driving wildlife declines.

This is clearly bad news for wildlife, but it is also bad news for people. The declines in wildlife populations could have resulted in the loss of many of the associated benefits, such as jobs, food security and income. Human-wildlife conflict has spiked. We found that resettlement farmers reported much higher rates of cattle losses to carnivores than farmers in communal areas, despite investing more heavily in anti-predator techniques. And another study reported that at least 21 people were killed in by elephants alone SavÃ© Valley Conservancy over 7 years.

Zimbabwe’s land reform programme has been catastrophic for wildlife and for human-wildlife conflict. What lessons can we learn from this? Land reform doesn’t have to mean changing land use. Land reform initiatives should maintain wildlife as a land use where it is most appropriate, while diversifying the ethnic profile of landowners. Leasing resettled land back to the former owners could benefit wildlife while also raising more income for new owners than switching to subsistence farming. Bringing in community members as stakeholders on private land and allowing them to benefit economically from wildlife will also encourage them to protect rather than poach animals. There are a whole range of potential models for achieving land reform in more productive and sustainable ways waiting to be conceived. By taking this opportunity to develop innovative models of land reform, Zimbabwe could once again become a world leader at managing land for the benefit of wildlife and for people.