Reminiscent of the biblical David and Goliath story the new kid in the political scene, the Zimbabwe Empowerment Movement is gearing itself to conquer the so called Zimâ€™s major political parties, The Zimbabwean has learnt. 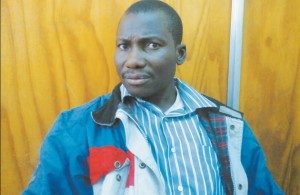 Speaking in an optimistic tone with this reporter in Gweru, President of the party, Garikai Sithole who claims to be the son of the late veteran politician and Zanu Ndonga leader, Reverend Ndabaningi Sithole said the party is fast growing as it is going around the country meeting with the people, fine-tuning its party activities and is ready to contest any by-election that comes- by.

â€œI can safely say as a politically party we are fully established registered and ready to take Zimbabwe to another level. My aim is to takeover my fatherâ€™s legacy and fulfils Ndabaningi â€˜s mission,â€ said Sithole adding that the Manifesto will be made public during his official launch to be held in Bulawayo in August this year.

The (39) year old Sithole who resides in Masvingoâ€™s Rujeko suburb, a retired solider announced that the party would be contesting in the 2018 elections.

â€œPreparations for ZEMâ€™s inaugural congress to be held in Bulawayo in August are believed to be at an advanced stage. Currently we are working tirelessly with other colleagues doted around the country. On the 27th of February we will be having Provincial launch in Mutare and will be in Gweru on the 11 of March 2016.

ZEM claims existing parties in Zimbabwe had failed to deal with the problem of corruption and this topic is high on their agenda. ZEM has since started distributing fliers in Masvingo with Mr Sitholeâ€™s face as the partyâ€™s president and presidential candidate for the 2018 elections.

â€œPlans for our congress are now at an advanced stage and certainly it will be held in Bulawayo as a symbolic gesture because the city is the cradle of nationalism in Zimbabwe.â€