The American corporate owner of the cargo jet impounded in Zimbabwe after the bloodied body of a man was discovered aboard during a refueling stop confirmed on Tuesday that man was a stowaway found in a compartment adjacent to the nose landing gear. The owner, Western Global Airlines of Estero, Fla., also said that it was working with the Zimbabwean authorities to investigate the matter. 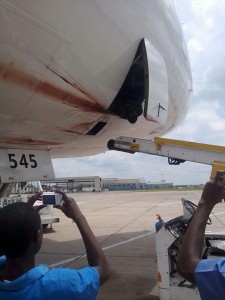 The MD11 aircraft, en route on Sunday to Durban, South Africa, from Munich, Germany, was carrying a â€œdiplomatic shipmentâ€ for the South African Reserve Bank, the company said. Officials quoted in Zimbabwe news accounts said the shipment was a large amount of South African currency.

Western Global Airlines, which specializes in cargo flights to Africa, said that the identity of the body had yet to be established but that there was â€œno indication that his presence is related to the company or this specific cargo shipment.â€