On the 18th of March 2016, Heal Zimbabwe held a public awareness meeting on the National Peace and Reconciliation Commission (NPRC) Bill in Chinhoyi at Shingirayi Training Centre. The meeting was attended by 121 community members. The public meeting allowed local community members to understand the constitutionally provided functions of National Peace and Reconciliation Commission as well as airing their concerns and reservations about the contents of the Bill. 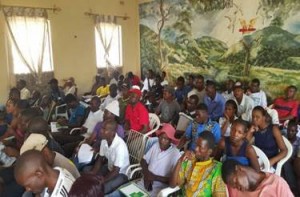 Part of the participants during the Chinhoyi meeting.

Mr Peter Liwanda of Chinhoyi Residents Trust presented on Zimbabweâ€™s history of conflict and violence and subsequent attempts for reconciliation while Heal Zimbabwe Trust provided an analysis of the NPRC Bill and its observations on the Billâ€™s shortcomings.

Chinhoyi residents at the meeting raised the following concerns about the Bill:

On the 22nd of March 2016, Heal Zimbabwe conducted a National Peace and Reconciliation Commission (NPRC) public awareness meeting in Marondera at Mbuya Nehanda Hall (Dombotombo). The meeting was attended by 104 community members, 70 of them being women and 34 men. The meeting was meant to raise communitiesâ€™ awareness about the NPRC functions and the contents of the NPRC Bill that was gazetted on December 18, 2015. Presenters at the meeting including Mr Vivid Gwede of ZIMRIGHTS, a Human Rights Defender Mr Mujeyi and Heal Zimbabwe spoke about the History of violence and attempts of reconciliation in Zimbabwe, NPRC functions and the contents of the NPRC Bill. A plenary to gather peopleâ€™s views was also done. Below are some of the issues that were raised by the participants: