EMMERSON Mnangagwa has thrown himself into an embarrassing situation by denying a report on his role in the Gukurahundi, forcing human rights lawyer, David Coltart, to dig into the archives to retrieve statements allegedly uttered by the VP fomenting the 1980s atrocities.

Mnangagwa was in charge of the CIO while Coltart had just started his career as a lawyer during the dark period. Coltart went on to represent many victims of President Mugabe’s crackdown on PF ZAPU and the civilian population in the Matebeleland Midlands procinces.

Mnangagwa, on Monday, issued a statement dismissing as â€œfalse and maliciousâ€, a report by Coltart that he had made the inflammatory remarks 33 years ago. Coltart recorded Mnangagwaâ€™s statements in his newly published autobiography and they were further quoted in a local daily.

At a rally in 1983, Mnangagwa is reported to have said: â€œThe campaign against dissidents can only succeed if the infrastructure which nurtures them is destroyed.â€

Mnangagwa, then intelligence minister in charge of the CIO, reportedly referred to the dissidents as â€œcockroachesâ€ and the Fifth Brigade as â€œDDTâ€, a deadly pesticide used to exterminate vermin.

â€œBlessed are they who will follow the path of the government laws, for their days on earth will be increased. But woe unto those who will choose the path of collaboration with dissidents for we will certainly shorten their stay on earth,â€ Mnangagwa also said.

But on Monday the VP issued a statement denying ever uttering the statements.

â€œThe Vice President and Minister of Justice, Legal and Parliamentary Affairs of the Republic of Zimbabwe, Honourable E.D Mnangagwa, has noted with concern the contents of an article entitled â€˜Coltart Shines Light on VPâ€™s Gukurahundi Roleâ€™ which appeared in the Southern Eye section of the NewsDay edition of 17th March 2016,â€ read a statement from the VP.

It went further, â€œThe article purports to be quoting extracts from Mr David Coltartâ€™s recent autobiography. The NewsDay article reports that Mr David Coltart alleges in his autobiography that the Honourable Vice President E.D Mnangagwa addressed a rally in Lupane on a date that is not specified, but sometime in the 1980s and said that the Government had the option of â€˜burning downâ€¦all villages infested with dissidentsâ€™ amongst others statements inciting violence against civilians.

â€œThe Vice President E.D Mnangagwa wishes to communicate that all the statements attributed to him in this article are a total fabrication and that at no stage during the 1980s did he address a rally in Lupane nor did he at any other venue utter those words in the article in question.

â€œThe Vice Presidentâ€™s legal practitioners are currently perusing Mr David Coltartâ€™s autobiography to ascertain the accuracy of the report in the NewsDay newspaper before considering appropriate action to be taken to address these false and malicious statements.â€ 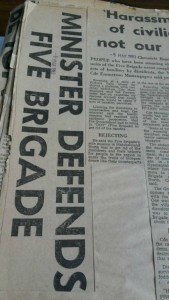 Threatened with a lawsuit, Coltart revealed the source of the material he used in his book-the Chronicle newspaper.

â€œMnangagwa has disputed the statements he is alleged to have made which are recorded in my book. These statements were taken from none other than the Government controlled Chronicle which reported on what he said at the time,â€ wrote the former education minister on his Facebook page.

The Bulawayo-based lawyer added: â€œHe (Mnangagwa) has never sued the Chronicle, nor disputed what they reported he said 33 years ago. Here are two extracts from the Chronicle dated 5 March and 5 April 1983 referred to in my book.â€

Many followers chipped in to say Mnangagwaâ€™s lawsuit against Coltart would be a good opportunity to reopen the Gukurahundi issue as it could reveal many unknown details.

The 1980s killings, named genocide by Genocide Watch, claimed about 20 000 civilian lives. Mnangagwa and defence minister, Sydney Sekeramayi, were named as among those responsible. Government has never apologised for the atrocities.