Shurugwi- Despite all peopleâ€™s rights education and campaigns done by the Government and some Non-Governmental Organisations, the elderly and disabled persons are still facing serious stigma and discrimination in most remote wards of Shurugwi districts. 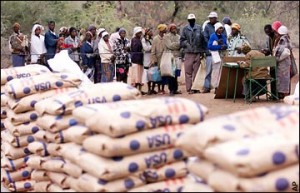 Zimbabweans are currently depending on distributions of food aid to survive due to a poor harvest last year and the economic crisis besetting the country, but assessment by this publication observed that food in some parts of the nation is being handed out on partisan and political lines to supporters of the ruling party and sidelining supporters of the opposition parties.

The rampant selective food distribution makes life difficult for opposition party members, the disabled and the elderly people. Villagers in ward 21 of Shurugwi South on Tuesday bitterly criticised the local councillor and his Zanu Pf food distributing committee for favouring Zanu Pf supporters in the distribution of food aid to drought victims in the ward.

“Our lives are at risk and the nation cannot afford to entertain the politicisation of food while the community is starving. This is highly uncalled for. The demand for villagers to produce a party card before receiving food should be stopped without delay,” said Jabulani Sayi from Sunrise Farm in Dorset.

“The government is not only for the ruling party, but must protect all its citizens, their rights as well as their welfare, he added. We condemn some members of government who have practised partiality and have only refused to serve people who do not belong to their own party,” he added.

Opposition parties in Zimbabwe have routinely accused the government of denying food aid to their supporters, a charge the authorities have always denied. It also accused well-connected individuals in both the private sector and government of taking advantage of food shortages, to hoard basic commodities and sell them at exorbitant prices.

In an exclusive interview, the 99 year old Koti Ngwenya who resides at village 3 Dorset also took a swipe at increasing levels of food looting, partisan distribution of food by the local councillor, Simon Kamurai and his Zanu PF leadership.

“Imagine young men are benefiting at the expense of us the elderly and disabled people. In each and every allocation the councillor benefit while us the old aged are denied food aid. I am not employed, I am now visually impaired. They routinely supply each other with food. May you tell the government that the food they are sending to us senior citizens is not getting anywhere near us? Next year I will be turning one hundred years. I donâ€™t know why they spurn me from benefiting, maybe itâ€™s because I am not educated? But I saw even those that cannot even write benefiting, but why me?,â€œ said the seemingly mind boggled nonagenarian, Ngwenya.

Current shortages of basic commodities have provided an opportunity for corruption by people in strategic positions, including councillors, government ministers and other government officials.

Dorset food distribution committee is composed of top Zanu PF district leadership, among them are National youth leader and Zanu PF district chairperson, Noel Mposi, Tendai, Mubereki (secretary) Patrick Mbiba(Political Commissariat ) Youth chairperson, Tafara Mubereki and Councillor Kamurai who doubles as the partyâ€™s treasurer. According to the disgruntled members of the community all the above Zanu Pf leaders are mandated to benefit in all allocation without exceptions.

â€œAbove all they dupe villagers of their hardly earned money under the guise of transport fees. We are made to pay large sums of money yet they use free transport from Shurugwi Community Share ownership trust. They are only required to pay about $80 worth of fuel and the rest is put to their personal use,â€ said a disgruntled woman who prayed for anonymity.