There is apparently an old Chinese warning against living in â€˜interesting timesâ€™ . . . interesting meaning dangerous, troubled, violent, precarious, unstable etc: In brief, all the â€˜interestingâ€™ conditions that now prevail in Zimbabwe. 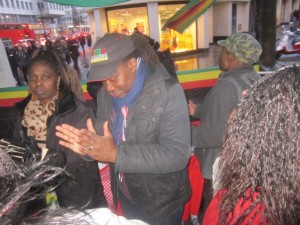 So hard luck to us after a week which saw the unveiling of Joice Mujuruâ€™s People First Party and the suspension from Zanu PF of War Veteransâ€™ MinisterMutsvangwa. Both events were overshadowed by the governmentâ€™s chaotic seizure of the Chiadzwa diamond mines owned by Mugabeâ€™s pals.

â€˜We wuz robbed,â€™ claimed Mugabe. â€˜Where has all the money gone?â€™ feigning not to have noticed the diamonds on the soles of the feet of his well-shod wife and well-heeled cronies and all-weather friends.

Chief friend Comrade China says it is offended and hopes itâ€™s all been a mistake. â€˜We hope that the Zimbabwean side would earnestly safeguard the legitimate rights of the Chinese companies and employees, according to the local laws and the â€˜Agreement on the encouragement and reciprocal protection of investments between China and Zimbabwe,â€™ Chinese ambassador to Zimbabwe Huang Ping said. Laws? Agreement? It appears the Chinese were born yesterday. But anyway it must mean farewell to the long-promised â€˜mega dealsâ€™ which we were told would usher in the promised land (see: http://www.zimbabwesituation.com/news/china-warns-zim-over-mine-grabs-dailynews-live/).

Zimbabwe is floundering with little sign of meaningful reform and sustainable, broad-based recovery says the International Crisis Group. â€˜Upbeat economic projections by international institutions are predicated on government rhetoric about new policy commitments and belief in the countryâ€™s potential, but there are growing doubts that ZANU PF can â€œwalk the talkâ€ of reform. Conditions are likely to deteriorate further due to insolvency, drought and growing food insecurity,â€™ it says (see: http://www.crisisgroup.org/en/regions/africa/southern-africa/zimbabwe/b118-zimbabwe-stranded-in-stasis.aspx).

One a cold rainy day, the Vigil welcomed human rights activist Ben Freeth on a brief visit to the UK. He went on to speak at the Zimbabwe Action Forum held after the Vigil and was encouraging about our work.

He said the situation at home was dreadful and remarked that he recently went back to see his stolen farm and found there were no crops, the irrigation system had been destroyed and his former workers were unemployed and impoverished. He warned that Zanu PF would be looking to control people by exploiting British and American food aid for party-political purposes. â€˜The British tax payer will be paying to keep Mugabe in powerâ€™.

Ben said he was skeptical about the sudden conversion to enlightened democrat of die-hard Zanu PF thieving functionary Joice Mujuru. He recalled how she and her murdered husband General Solomon Mujuru had deceived and stolen their farm from its previous owner who had been forced to flee the country with only one suitcase.

He was critical of the European diplomats living in what he called the â€˜Harare bubbleâ€™ and said how difficult it was to get any of them to go out and see things for themselves. He said he will join the prayers in Africa Unity Square on the anniversary of the murder of the Vigilâ€™s friend Itai Dzamara who was abducted by military intelligence in Harare on 9th March last year.

The Vigil will mark the anniversary next Saturday when we will be joined by MDC UK Youth. Benâ€™s comments about the diplomatic community prompted us to recall that the French Ambassador in Harare Laurent Delahousse was recently reprimanded by Foreign Affairs Minister Â Â Â Â Â Â  Mumbengegwi about his confrontational approach over Dzamara. Mr Delahousse said afterwards he was changing his â€˜strategyâ€™. Presumably this means instead of joining the mourners in Africa Unity Square he will be diplomatically licking boots in State House (see: http://www.thezimbabwean.co/2016/02/dzamara-france-says-changing-tack/.)