The Gweru community believe that the Zanu PF led commission, presently managing the affairs of the city, are not doing their job. In fact, service delivery deteriorates on a daily basis and has since their appointment, mid 2015. 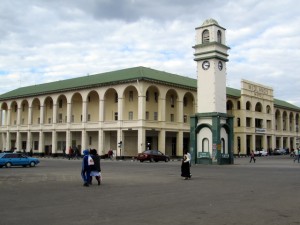 The commission, led by former Masvingo Town Clerk, Tsunga Mhangami is being criticised by all sectors of society amid revelations that they are more interested in self gratification than in the well being of the city and its residents.

A well placed city representative told this reporter that the three commissioners each earn an average of $2 000 allowance per week, but that the city council cannot afford to successfully collect refuse.

A prominent business tycoon in the city believes that the present commission consists of the worst batch of Zanu PF ‘leaders’ that Gweru has ever been subjected to. The present lack of accountability and transparency has not been experienced since independence and service delivery continues to deteriorate.

â€œWe canâ€™t stand by and watch our city being destroyed by these thugs. They are siphoning thousands of dollars from the cash strapped local municipality on a daily basis at the expense of providing service delivery,â€ said the businessman who asked not to be named.

In an unexpected turn of events, the commission has not only lost popularity amongst Gweru residents, but fellow Zanu PF officials are now also voicing their criticism.

Former contract council employee and Zanu PF member, Frank Muzorera ,who allegedly pushed for the suspension of the previous MDC T councillors and the appointment of the present commission has now become critical of them over all the allegations of failing to be accountable and transparent.

According to this reporter, it is alleged that Muzorera, a staunch Zanu PF supporter was recently beaten up at a residents meeting by Zanu PF commissioner, Mark Choga after he insisted that members of the commission reveal their monthly salaries and allowances.

â€œThis ‘management’ commission will go down in history as the cityâ€™s worst period ever and we plead that that these three commission members be removed before the situation gets even more out of hand,â€ senior city residents told this reporter.

â€œThese three are a thorn in the flesh of all vendors. Recently they threatened to destroy market stalls in the CBD that have been operating for more than 20 years claiming that they are illegal. Where were they for the past 20 years when we were operating at these premises? In a poverty stricken city where residents are eking out a living through vending, how do they expect us to survive?â€ asked one of the vendors.

The suspended MDC T councillors were, this month, ordered to resume work when the Bulawayo high court ruled against their suspension by Kasukuwere. However victory was short lived after power hungry Zanu PF members subsequently appealed the verdict. This will further delay the removal of an inadequate Gweru commission.