Zimbabweans in exile join in demanding a commission of inquiry into the involvement of Zimbabweans in offshore tax havens and believe it will open a can of maggots that have been sucking dry the carcase of our economy. 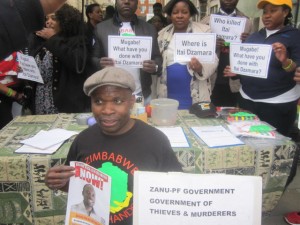 The leaking of millions of documentsfrom the dodgy Panamanian law firm Mossack Fonseca has exposed the involvement of Zanu PF financiers Billy Rautenbach and Nicholas van Hoogstraten. This was predictable but it is also alleged that Mugabe himself has used the firm to hide his vast wealth in havens around the world.

The MDC T MP Eddie Cross says Mugabeâ€™s personal wealth is estimated at over Â£3 billion gained from all sorts of activities in Zimbabwe and the region. He adds: â€˜The disclosure by Mr. Mugabe that some $15 billion in revenues had somehow vanished from the Marange diamond fields over a six year period from 2008 to 2015 reveals the extent of these activities. He is known to own, directly or indirectly, luxury homes in South Africa (Sandton and Durban North), Hong Kong, Singapore and Dubai as well as in Harare.â€™

The Japanesecommentator Ken Yamamoto, who closely follows Zimbabwean affairs, describesMugabeâ€™s disclosure as: â€˜the mother of all scandalsâ€™. He says: â€˜With the stolen $15 billion, Zimbabwe could have provided its economy a huge bailout, funding refurbishment of railways infrastructure, construction of power plants, construction and expansion of national highways, a bailout to the sinking industrial sector, provided clean water in cities, funded alternative agriculture and processing industries and invested in clean energy.â€™

Yamamoto goes on: For a 92-year old man whose leadership has wasted an entire generation to laugh and crack jokes while talking about such grand theft under his watch is a vulgar insult to millions of jobless Zimbabweans and millions more who are presently being fed by donors.â€™

He concludes: â€˜This kind of plunder must immediately make Zimbabwe pass a vote of no confidence in Mugabe and his government. If this theft does not cause Zimbabweans to demand that he resign, then nothing else will. In that case, going forward, Zimbabweans must just be left to their own devices and the donors currentlyfeeding the population must just take their efforts to other countries. Thecountry cannot be helped. And no more of this nonsense that Zimbabweans are the most literate people in Africa.â€™ (See: http://www.thezimbabwean.co/2016/03/yamamoto-president-bob-must-be-fired/).

War veteran and former Zanu PF insider Margaret Dongo also has no illusions about the greed and corruption in Zanu PF. In a recent interview with the Daily News she said: â€˜I left Zanu PF in 1995, and watching from the terraces I am seeing people fighting for a dwindling gravy puddle. The party is a sinking ship and itâ€™s all about who has power now to access more of the little loot left before the inevitable big bang.â€™

She went on to say: â€˜The 90 per cent unemployment obtaining in the country, the starving masses that the government is unable to feed, the dilapidated infrastructure all-around, the serious shortage of drugs, deteriorating education standards, poor sanitary facilities are all a result of Zanu PF’s misrule.â€™ (See: https://www.dailynews.co.zw/articles/2016/03/16/mugabe-zanu-pf-are-gone-dongo).

Â For latest Vigil pictures check: http://www.flickr.com/photos/zimbabwevigil/. Please note: Vigil photos can only be downloaded from our Flickr website.

Â FOR THE RECORD: 36 signed the register.