The Second day of the National Peace and Reconciliation Commission public hearings took off today 12 April 2016 in Masvingo and Gweru. 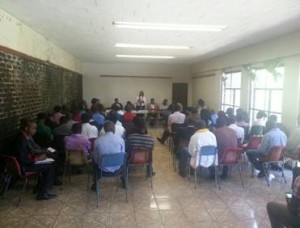 Some of the participants during the Gweru hearings

The NPRC public hearings are part of the Parliamentâ€™s public consultations on the legislation that operationalizes the Commission responsible for national healing, justice and reconciliation. The hearings are taking place from the 11th – 20th of April 2016.

Heal Zimbabwe is concerned about the low turnout of people at the meetings especially yesterday in Gutu and Kwekwe and today in Gweru. The organisation continues to implore all interested stakeholders, political party members, survivors of political violence, ordinary citizens to turn out in their numbers and actively air out their concerns regarding the ills of the bill which were also noted by the Parliamentary Legal Committee through its adverse report.

In Masvingo, Hon Senator Mumvuri opened the meeting by reading out only the functions of the NPRC and did not go through the provisions of the bill as was done in Gweru by Hon Jessie Majome. Another issue of concern raised by community members is that they did not have copies of the Bill. Hon Senator Mumvuri then apologized and stated that it was the responsibility of Members of Parliament to distribute copies of the Bill prior to the meeting.

Key issues emerging from participants are that;

The Minister has too many powers that might affect the work of the Commission.

The meeting in Masvingo was attended by approximately 300 people and in Gweru a total of 89 participants.

The organisation shall continue to monitor and mobilise members of the public to meaningfully participate in the hearings. Please find below the schedule of all the meetings: