On this year's Independence Day, 18th April, Dr Patson Dzamara staged a one-man demo at the National Sports Stadium. Independence Day marks the birth of modern Zimbabwe, but more than that, it marks the date when Zimbabweans were supposed to have been given their freedom, hard-won after years of bloody and cruel war. 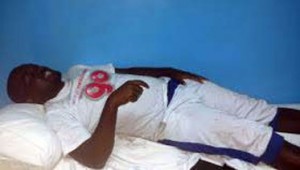 Yet today, the promises of Independence seem to have been blown away by the wind. Itai Dzamara, Patson’s brother, was abducted in broad daylight by suspected state agents over a year ago.

Having exhausted all other avenues, and having been ignored by our Government, Patson, in his exasperation, went to the stadium as the only way to confront the government ignoring his family’s plight.

Having entered the stadium, he found a piece of cardboard and wrote a message asking where his brother is. After the President’s speech, he went with it to the VIP tent and stood silently, holding his placard. Dr Jonathan Moyo was the first to spot him and looked nervous and jittery… perhaps the reaction of a man feeling guilty? It took a good two minutes for security to react, an indication of lack of professionalism. After all, if it hadn’t been a peaceful citizen, who knows what could have happened?

The security details dragged Patson off the turf towards the bleachers, and once under them, forced him to kneel on his own feet in an uncomfortable position. They had already started beating him with their fists and one baton stick, ten plain-clothes security agents on one unarmed civilian who was exercising his Constitutional right to demonstrate peacefully. They told him they were in hot soup, in trouble because of him…. when it was their own incompetence, further demonstrated by their lack of discipline. One said, “You want to know where your brother is? Let’s take him to join his brother!”, confirming our suspicion that the State has known where Itai is all along.

They forced his mouth open and poured bottle after bottle of water down his throat, forcing him to remain in position by hitting and kicking him. One who appeared to be a ZANU PF member rather than a ‘professional’ security officer broke a glass bottle, intent on using it. Thankfully, a senior official arrived and stopped him, although the former did kick Patson before recognizing him.
Eventually, he was bundled into a twincab and driven to Harare Central Police Station. Only on the way there did they ask him why he did what he did.

At the police station they continued force-feeding him water at the CIO section. They started interrogating him. Patson told them “Be quiet, and I will explain to you and answer all your questions.” He explained to them his position, that he had exhausted all other avenues and the State had not been forthcoming in the matter of his brother, driving him to this desperate act. Finally a senior member of the Law and Order section came and they spoke, having met before. Patson was told to control himself, because he is causing trouble for them. He was then allowed to make a phone call.

ZLHR member Advocate Mtisi and other comrades attended and made sure Patson received medical attention. Thankfully, he has no fractures or internal bleeding, although his ankle is sprained in addition to the bruising.