FORMER national healing co-minister Moses Mzila-Ndlovu says President Robert Mugabe and those who took part in the killing of 20,000 civilians in the countryâ€™s western provinces early 1980s should face punishment for the heinous crimes. 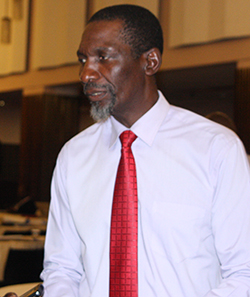 Gukurahundi killers must not get away with it … Moses Mzila-Ndlovu

The outspoken opposition politician was speaking in Harare Wednesday evening at a panel discussion on governmentâ€™s envisaged peace and reconciliation commission.

Currently, Parliament is in the process of fine tuning the National Peace and Reconciliation Commission Bill and is set to gather views from ordinary Zimbabweans in April.

But Ndlovu was quick to poke holes in a process he said was a ruse by the 92-year-old leader and his accomplices who have failed to atone for their crimes.

He said anything short of punishment on the perpetrators of the killings would not placate victims of the atrocities who still nurse emotional wounds inflicted over three decades ago.

The former MDC legislator said the olive branch purportedly extended to white former oppressors by the then Prime Minister at independence in 1980 was a ploy to pave way for the ethnic cleaning of Ndebeles whose support for the rival PF Zapu then threatened his bid to turn Zimbabwe into a one party state.

â€œA precedence was set in 1980 not to deal with prior criminal acts by the State and other people in leadership,â€ Ndlovu said.

â€œSadly this Bill is guided by none other than one of the most active perpetrators of the Gukurahundi massacres and his Siamese twin has actually publicly said the Gukurahundi was a ploy of the western countries.â€

He was referring to Vice President Emmerson Mnangagwa who is accused of direct involvement in the so-called Gukurahundi period.

Mnangagwa, who also holds the justice portfolio in cabinet, will be have overarching influence on the operations of the peace commission while Mphoko, who doubles as national healing minister, will also has sway on how peace should be administered in the country.

â€œHow can you then think that these two people are going to guide this process when they lack integrity; how can you trust them,â€ Ndlovu said.

â€œ… I am yet to come across somebody who is going to prosecute himself for crimes against humanity.â€

Ndlovu, who has now become the leading voice in Matabeleland against Gukurahundi, said the alleged perpetrators of the killings who still occupy senior government positions must be hounded to their graves in pursuit of justice.

â€œI am not pious at all. I believe in punishment and thatâ€™s my right. I believe people must be punished for their crimes; simple,â€ he said.

The firebrand former MDC secretary general said Zimbabweans were wasting time pretending to be enacting a law to restore peace when the same perpetrators were not showing any regrets for past and present offences.

No remorse from perpetrators

â€œI have not heard anyone of these people step up forward to say ‘I am sorry for what I did’, so why should I forgive?

“Unless you are such a coward that you are saying I will forgive this person even in they have not apologised. You must be mad, and I am not about to be mad,â€ he said.

â€œI believe people must be held accountable for their deeds. It does not matter how long it takes; even if it means people must arrest the grave, they must do so. Thatâ€™s what I believe in.â€

Ndlovu, who was arrested when he was minister 2012 for attending a meeting convened by villagers in Lupane over the atrocities, vowed he will not be silenced.

Wednesdayâ€™s Heal Zimbabwe Trust sponsored event was a culmination of over 67 outreach meetings held countrywide by the peace based NGO to gauge the views of violence victims and ordinary Zimbabweans on the envisaged law.