CONTRARY to initial claims by ZRP that officers were going to be busy and would therefore not be able to provide manpower for the Thursday march cops were all over Harare as MDC-T held their peaceful demonstration. 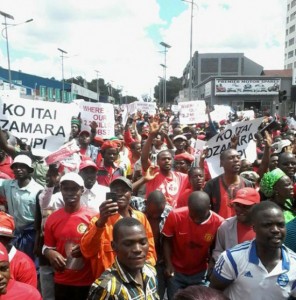 ZRP deployed water canons to strategic areas including at the Harare Magistrates court where thousands of MDC-T supporters gathered for the march against corruption, poverty and human rights abuses.

It took a High Court decision for the march to go ahead after the MDC-T appealed police decision to block the demonstration claiming they were unable to provide officers to monitor the marchers.

In a letter to the MDC-T leadership this week, officer commanding Harare Central police, Newbert Saunyama, claimed the mass protest stood to disrupt â€œthe flow of traffic and people as well as peace being enjoyed currentlyâ€.

â€œWe would like to advise you that we are unable to provide enough manpower, as most of our officers are engaged in the preparation of the independence celebrations. Any inconvenience caused is sincerely regretted,â€ wrote Saunyama.

But when the MDC-T members and activists gathered for the march they found many officers waiting for them in various strategic areas around Harare. MDC-T secretary general Douglas Mwonzora addressed party members on the purpose of the march.

He said apart from the missing $15 billion the march was meant to protest continued human rights violations and lack of employment.

The marchers, clad in red T-Shirts, then moved to Africa Unity Square where the abducted and still missing journalist, Itai Dzamara, used to stage his demonstrations.