The new National Constitution of Zimbabwe, signed into law by the State President in March 2013 states in Chapter 14 that: 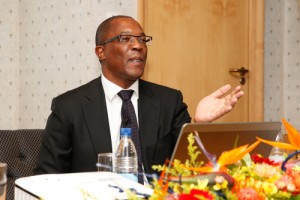 Preamble
Whereas it is desirable to ensure:
(a) The preservation of national unity in Zimbabwe and the prevention of all forms of disunity and secessionism;

(b) The democratic participation in government by all citizens and communities of Zimbabwe; and

(c) The equitable allocation of national resources and the participation of local communities in the determination of development priorities within their areas;

There must be devolution of power and responsibilities to lower tiers of government in Zimbabwe.

(1) Whenever appropriate, governmental powers and responsibilities must be devolved to provincial and metropolitan councils and local authorities, which are competent to carry out those responsibilities efficiently and effectively.

(2) The objectives of the devolution of governmental powers and responsibilities to provincial and metropolitan councils and local authorities are:-

(a) To give powers of local governance to the people and enhance their participation in the exercise of the powers of the State and in making decisions affecting them;

(b) To promote democratic, effective, transparent, accountable and coherent government in Zimbabwe as a whole;

(c) To preserve and foster the peace, national unity and indivisibility of Zimbabwe;

(d) To recognise the right of communities to manage their own affairs and to further their development;

(e) To ensure the equitable sharing of local and national resources; and

(f) To transfer responsibilities and resources from national government in order to establish a sound financial base for each provincial and metropolitan council and local authority.

(1) Subject to this Constitution and any Act of Parliament, a local authority has the right to govern, on its own initiative, the local affairs of the people within the area for which it has been established and has all the powers necessary for it to do so.

It is clear from these extracts from the new Constitution that the devolution of power from the Central Government to Local Authorities has become a substantive policy to which the Government has to adhere. The Constitution is the supreme law of the country and the Minister of Local Government, Hon. S Kasukuwere, no longer has the right or the responsibility or the power to give instructions to the democratically elected Council for the City of Harare.

It must be noted that upon the retirement of the Town Clerk of Harare on the 31st December 2015, the City began a search to recruit a suitably qualified and experienced person to appoint to this important post. To do this they appointed a qualified personnel recruitment agency to advertise the post, shortlist potential candidates and then to support the interviews of these candidates.

To interview the candidates, a Committee was formed, chaired by the Mayor and comprising the Chairpersons of Committees in the Council. A final shortlist of three candidates was agreed and the outcome of the final selection process was the nomination of Mr. James Mushore to the post. Reports from the recruitment agency and the interview process identified Mr. Mushore as the most qualified and experienced candidate for the position by far.

At a special meeting of the full Council held on the 23rd March 2015, the recommendation of the Committee was endorsed and steps are being taken to inform the Urban Councils Board of the decision of Council, following which Mr. Mushore will be appointed as Town Clerk on a three year contract which may be extended by a further three year term in office if the Council so decides.

The MDC is delighted that, despite a substantial reduction is the remuneration attached to this post, that the Council has been able to attract a candidate of his caliber and experience. The Party is sure that he will bring much needed administrative, leadership and management skills to his new post.

It should be noted that during the recruitment process, that the Party emphasized to the Council that at no time should the issue of political allegiance be raised so as to comply with Section 266 of the new Constitution which states:

(2) Employees of provincial and metropolitan councils and local authorities must not be office bearers of any political Party.

It must be noted that this is not the case in many local authorities where the Chief Executive Officers or Town Clerks openly flaunt their membership of Zanu PF and in a number of cases hold posts as office bearers in the Party.

Following the decision of the Harare City Council to appoint Mr. Mushore to the post of Town Clerk, the Minister of Local Government, in almost unseemly haste, had a letter delivered to the Council stating that he was rescinding the decision of Council. The position of the MDC in this matter is that the Minister no longer has any authority to make such a ruling which is completely ultra vires the new Constitution and therefore null and void in legal terms.

It is hoped that the Harare City Council will proceed with this appointment and if challenged, take the matter up with the Courts as the final arbiter in such matters.