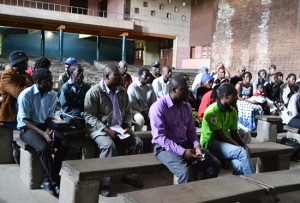 Some of the residents who attended the meeting with city councillors

Sakubva is one of the oldest high density suburbs in the country and some families in areas such as Mawonde, Chisamba single quarters and Chimoio flats are still sharing ablution facilities as little has been done to upgrade infrastructure since independence in 1980.

So bad is the situation that some elderly residents have taken it upon themselves to clean the public toilets without protective clothing as the council has failed to do the job since the termination of contracts for the 250 workers.

Recently, council told a residentsâ€™ meeting that they fired the contract workers as the council moves to implement some of the recommendations in the audit report which was presented to the council by Kasukuwere.

However, residents, particularly in Sakubva said they were not happy with the move as the exercise targeted younger and more energetic workers, leaving council with elderly staff who cannot cope with the work.

And tempers flared during a community dialogue meeting recently organised by the Media Institute of Southern Africa (MISA-Zimbabwe) at Sakubvaâ€™s Beit hall.

The meeting brought together residents representative organizations, councillors, residents and the media to discuss the state of service delivery in the eastern border city. Residents blamed the local authority for giving them a raw deal.

They said the move by the minister to allow council to terminate the contracts of 250 workers, most of them refuse collectors and toilet cleaners, left them at the risk of disease outbreaks due to non-collection of garbage.

â€œWe donâ€™t see the reason why you continue to demand money from us when we are cleaning the toilets on our own.

â€œWe are using our resources and the minister should come and clean the toilets for us,â€ said one resident who identified herself as Clara Matema, adding she was in her 80s.

Residents said there was no service delivery to talk of in Sakubva, adding that council had not been collecting refuse for a long time while public toilets were not being cleaned exposing them to a myriad of diseases.

They also blasted the councilors for â€œsleeping on dutyâ€ while the city management â€œplunders council resourcesâ€.

However, Ward 4 councillor, Edson Kalulu, said the councilors were not to blame as they were only following a ministerâ€™s directive.

â€œYou cannot blame us because we are just implementing Kasukuwere`s directive. He told us to lay off workers to reduce the wage bill but he did not see the repercussions,â€ said Kalulu.

â€œWe could have fired the old staff but he asked us whether we were remitting their pensions and the management was not doing so. The minister told us to work with the available staff until we raise their pensions.â€