CLOSE to 10 000 people turned up Thursday as MDC-T leader Morgan Tsvangirai and his wife Elizabeth led a peaceful march against corruption and poverty. 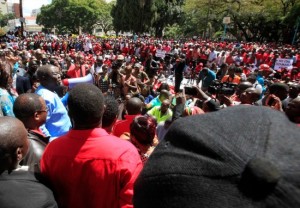 MDC-T supporters braved heavy police presence and gathered at Freedom Square in front of the Harare Magistrate Courts before they marched to Africa Unity Square, where Tsvangirai addressed them.

Some of the marchers sang; â€œAsi Mugabe tiudze kwawakaendesa mari.â€ (Tell us Mugabe, where is our money? This was in reference to the $15 billion which Mugabe recently said was stolen from the Marange diamond sales.

In a brief speech, the MDC-T leader told his supporters that Mugabe had no solution to the problems faced by the nation and called on him to step down immediately.

He said, â€œWeÂ are callingÂ on MugabeÂ to step down from powerÂ as he is too oldÂ to continueÂ holdingÂ the office of the president in the country, we are not goingÂ to force him to resignÂ but we are goingÂ to defeat him in the elections.â€

The former Prime Minister mourned the collapse of the countryâ€™s industries, saying Zimbabwe has been turned into a vending nation.

â€œMugabe promised to provide 2 million jobs to the people but, instead, he has created 2 million vendors and this is why we are asking him to resign because he has failed to run the country,â€ he added.

Tsvangirai also expressed gratitude to the people for demonstrating peacefully to voice their concerns.

â€œWhat you did today-demonstrating for your rights to have jobs, better education and access to health and medicine-is a testimony to Zimbabwe that we have a failed leadership which should go.

â€œThis demonstrationÂ today is a new chapter in the country as the constitutionÂ is clear that it is our right to demonstrate, we are going to be holding many more demonstrationsÂ in every province ending withÂ a big national demonstration,â€ said Tsvangirai.

The march was given a last minute green light as police had denied MDC-T the right hold the demonstration. On Wednesday, High Court granted an order for the march to proceed as planned.

There was heavy police presence throughout central Harare with cops reportedly tear-gassing people at Harvest House. No injuries have been reported yet.