ALTHOUGH her abduction and harrowing torture at the hands of government agents happened eight years ago, it is still vivid in the mind of human rights activist Jestina Mukoko, who released her new book on her ordeal in South Africa on Wednesday. 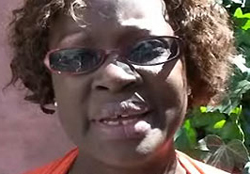 We need to talk about rights abuses … Jestina Mukoko

For 21 days in 2008 Mukoko, who was abducted from her home in the early hours, was tortured while her whereabouts were kept secret.

Mukoko’s â€œcrimeâ€ was her quest to expose human rights abuses by President Robert Mugabe’s government, during the violent 2008 general elections.

Speaking in an interview with African News Agency at her publisher’s offices in Rosebank, Mukoko said she decided to pen down her experiences and share it with as many people as possible.

Her book, titled â€œThe abduction and trial of Jestina Mukoko: The fight for human rights in Zimbabweâ€ was released in South Africa on Wednesday.

She said she hoped that through her book, people, especially Africans, would learn that there were many rights abuses in on the African continent.

â€œFor me, I thought this is a story I wanted to share with people, and I think the idea of putting it down in a book came because I never got a chance to tell where it actually started and where it ended, even though a lot of people from all over the world contacted me for interviews after the abduction… I felt that people did not get the complete picture of what actually transpired.â€

By writing a book, Mukoko said she wanted people to know her background and who she is.

Doing so, she said, was a way to confirm the victory for Zimbabwean human right activists, who were involved in campaigns demanding her release.

â€œI am not going to be the first to be abducted and tortured in Zimbabwe, neither am I going to be the last. Unless we talk about it, people will not know that there has been methods used on others and how they worked,â€ said Mukoko.

â€œSo I took this as a learning curve as well. After my long-winding trial, I thought it was important for people to know that you are innocent until proven guilty.â€ Mukoko, a former journalist for ZBC, became an activist after she joined an independent radio station.

She said she left the state broadcaster in 2000 because she was increasingly concerned about the level of editorial interference.

She was working for the Zimbabwe Peace Project, a human rights non-government organisation when her ordeal started at around 5am on a Wednesday in December 2008.

Mukoko said her son, who was 17 years old at the time, knocked on her bedroom door while she was still in bed.

He said there were people looking for her at the gate.

â€œI did not think much of it, I had planned to relax and sleep in that day ahead of my vacation. My son said the people looking for me were police officers,â€ recalled Mukoko.

â€œI thought there could have been a house break-in at one of my neighbours, hence the police at my gate wanting to ask me questions. I woke up, put on my morning gown and walked out of the house with my son behind me. That was the last time my son saw me that day.â€

Six men and a woman bundled Mukoko into an unmarked vehicle after confirming that she was indeed the person they were looking for.

Mukoko was ordered to lie on one of the men’s lap and stay quite as they drove off.

She remembers noticing a rifle on the floor of the car, before she was blindfolded.

Mukoko said she realised her’s was not an ordinary police arrest.

Loud music was played during the 30 to 45 minutesâ€™ drive.

â€œNo one told me why they were taking me away, I was not even allowed to dress decently … I did not have my undergarments on,â€ Mukoko said.

â€œWhen the car stopped, I realised there was loud music again at the place I was brought in. I was put in a small room which had shelves. They took a piece of cloth and replaced the first woolen cloth to blindfold me again and locked the door.â€

During her ordeal Mukoko said she worried about her son and wondered if he would be able to tell her family about what happened.

They began interrogating her. They wanted to know about the Zimbabwe Peace Project, the NGO she worked for.

They asked her questions about how it operated and they also wanted information about a trip she and her colleagues undertook to Botswana for a debriefing after the 2008 elections.

The Zimbabwe Peace Project monitored and documented human rights violations during the violence marred general elections. Mukoko said she told them â€œeverythingâ€ about her organisation and its work, all of which was public information.

Her interrogators accused Mukoko of working with the opposition Movement for Democratic Change (MDC).

They accused her of recruiting party youths to receive training in Botswana.

Mukoko said the physical torture started after her assailants realised they were not getting what they wanted out of her.

Her interrogators offered her a chilling choice to either turn state witness â€œor face extinctionâ€ and be buried in the premises.

Mukoko said she was repeatedly whipped on the soles of her feet until she could not recognise her feet anymore.

â€œThey used a long steel covered in rubber all over … it was the most painful thing my body had ever experienced,â€ lamented Mukoko.

â€œThat method of torture is called falanga, where they whip your soles because they knew that in the past it was not easy to detect the injuries, even through x-ray. But now there is scan called the colour doppler, that can easily detect dilated veins that are in line with that kind of torture.â€

Mukoko was locked away at the mercy of her abductors and after 21 days she was then taken to a police station, where she was charged and placed in a cell.

Mukoko said she realised she was not the only person at the premises when she arrived at the police station.

Her lawyer and family were not allowed to see her while she was locked up in a police cell.

Mukoko was then taken to court, without her knowledge, but the case was not heard.

After the court farce, Mukoko was sent to Chikurubi Maximum Prison in Harare, where she spent two months.

During that time she was in and out of court. â€œAt Chikurubu Maximum Prison, which was a terrible place to be in, I could be visited by family every day and could see my lawyer,â€ said Mukoko.

â€œIn court, I argued for the stay of criminal prosecution, on the basis that the evidence that they said they had against me was extracted during torture, and that my rights as a Zimbabwean citizen were violated through the abduction and that torture.

â€œThe case was then referred to the Constitutional Court as the magistrate felt that it had the merits to be heard in the higher court.â€

The case was heard in June 2009, and the verdict was handed down three months later in September.

The judges unanimously agreed that Mukoko’s rights had been violated by the state through its agents.

â€œI was being accused for recruiting for the MDC, had them cross into Botswana to train in order to overthrow a constitutionally elected government, an accusation which was refuted by the government of Botswana,â€ recalls Mukoko.

â€œI was accused of terrorism by my government. The charges didn’t stick, I got a permanent stay of criminal prosecution.â€

For a long time, Mukoko could not put on high heels as she struggled with the pain in her feet, and could not sleep at night.

â€œThe pain made me numb … somehow I felt i was drifting from my body during the days of torture and became something else. I received counselling, and all along I thought I was on a road to recovery and that I would be able to tell my story without breaking down … I am only recognising now that I am still far from that space.â€

Mukoko’s fearless fight for human rights continues through the Zimbabwe Peace Project, which she heads as national director.

She lives in Harare and has received international accolades for her work as a rights activist.