Villagers from Mukuvamombe village in Makoni North, Ward 5, are living in fear after seven houses belonging to opposition supporters were burnt down on Tuesday night, May 26, 2016 by known Zanu (PF) activists from the area. 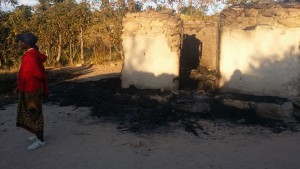 The affected victims are from the Renewal Democrats Zimbabwe (RDZ) party which is led by former Energy Minister, Elton Mangoma.

Among the affected was the headman, Solomon Mukuvamombe and village head, Robert Mukuvamombe.

The Crisis Report gathered that the arson attacks were carried out as a way of instilling fear in villagers against testifying in a case in which Zanu (PF) activists will face charges of assaulting the Headman, Solomon Mukuvamombe last year.

When the Crisis Report team arrived at Mukuvamombe village, a group of terrified villagers, including the victims of the arson attacks, were gathered at headman, Solomon Mukuvamombeâ€™s homestead waiting to be addressed.

Robert Mukuvamombe, the village head narrated the ordeal to the Crisis Report.

â€œIt was around 11pm when I heard my dogs barking and when I came out, I saw a group of men who were trying to set my house on fire and they ran away after they were chased by my dogs. At that time, I realized that the Headmanâ€™s house was on fire.

â€œThere was a boy who was sleeping in the hut belonging to the Headman and luckily, he managed to escape the inferno. I had to rush to the Headmanâ€™s house to see what was going on but we did not mange to put out the fire. When we tried to move around to alarm other villager, that was when we realized that a number of houses had been set on fire as well,â€ said Mukuvamombe.

The victims told the Crisis Report that they lost all their property and grain after the arson attacks.

This comes at a time the villagers are facing starvation due to bad harvests as a result of the drought that hit the area.

Anna Mukuvamombe, who had her two huts burnt by the Zanu (PF) activists, said she was devastated and was now living in fear of her life.

â€œI have lost all my property and food and I do not know where to start from right now. I would like to believe this is a case of politically motivated violence because there was a time when these Zanu (PF) guys threatened me against opposing their party.

â€œThe most troubling thing here is that we are failing to get justice because there has been a lot of attacks on opposition supporters here but there is no action from the police such that we have even lost confidence in the law enforcement agents,â€ said Anna.

Villagers who spoke to the Crisis Report on condition of anonymity for fear of victimization said although the perpetrators had been arrested by the police, they still remained skeptical whether justice would take its course.

The police in Zimbabwe has come under fire for partisan conduct in violation of the countryâ€™s supreme law with the police Commissioner General, Augustine Chihuri on record declaring that he was a Zanu (PF) loyalist.